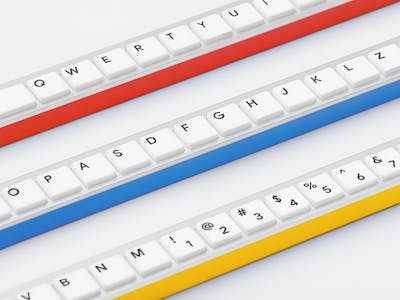 If you’ve ever looked at your computer keyboard and wondered why the keys are arranged in a seemingly random order, you might be surprised by the answer: it is a carryover from an 1870s typewriter keyboard layout. Nobody even knows for sure why its creator, a newspaper editor and printer, chose that arrangement. And yet we still use it today for no reason other than convention. Google Japan engineers realized how absurd that is and decided to redesign keyboards. Their new Gboard Bar is sure to revolutionize the industry and become the keyboard of the future.

As you can see, the engineers threw out silly convention and approached the design with a fresh perspective in order to arrive at this fundamentally rational design. Instead of placing characters in weird locations all around a quasi-grid, they arranged the keys in a neat, orderly row. To avoid confusing users, they kept the traditional QWERTY character order. But all 101 keys sit in a single row beginning with the ESC key, then the function keys, and so on. To improve usability and typing comfort, they centered the space bar. This practical design optimizes the usage of desk space, as it is only about 52mm deep (and 1,650mm long).

The great thing about this project is that it is open source and anyone can build their own Gboard Bar. Google Japan published all of their design files on GitHub, which includes the PCB files and code. To keep fabrication costs down, there are several short PCBs (each of which hosts a handful of Cherry MX key switches). If users want a wired interface, they can use a Pro Micro development board as the controller. If they prefer wireless, they can use an M5StickC ESP32 development board. The case can be 3D-printed or machined from aluminum.

And Gboard Bar isn’t just a keyboard; it can serve many other everyday purposes. Going for a hike? Use it as a walking stick. Doing tightrope walking? Use it for balance. Measuring your kid’s height? Just stand it up next to them and press the key closest to the top of their dome. You can even catch bugs with the handy net attachment.

Google Japan hasn’t yet announced when the Gboard Bar will be available on store shelves, but we assume that we’ll have access to this innovative new design by the holidays.