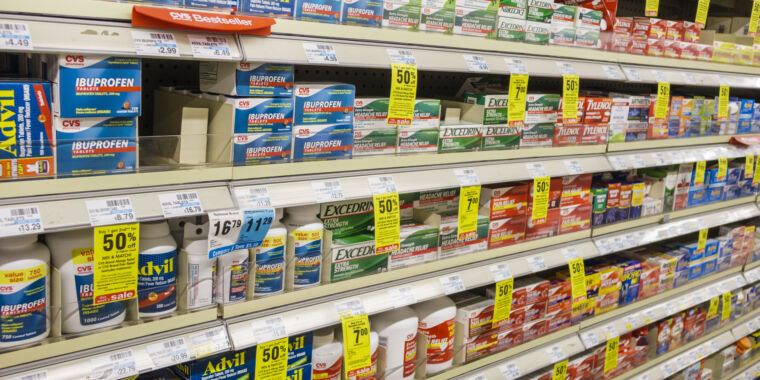 Pharmacy giants CVS and Walmart will have to face trials over claims that placing ineffective homeopathic products alongside legitimate over-the-counter medicines on store shelves deceives consumers into thinking that the pseudoscientific products are akin to evidence-based, Food and Drug Administration-approved drugs.

The claims come from the nonprofit organization Center for Inquiry (CFI), which filed nearly identical lawsuits against CVS and Walmart in 2018 and 2019, respectively, to try to boot homeopathic products from pharmacy aisles for good. CFI claimed that deceptive placement of the water-based products violated the District of Columbia Consumer Protection Procedures Act (CPPA).

Two lower courts initially dismissed the lawsuits. But, in a unanimous ruling last week, a panel of three judges for the District of Columbia’s highest court overturned the dismissals in a consolidated appeal, allowing the trials to move forward.

CFI may need more evidence to prevail during the trial, Senior Judge Phyllis Thompson wrote on behalf of the panel. “But, at this juncture, we cannot say that it is implausible that a reasonable consumer might understand [CVS and Walgreen’s] placement of homeopathic products alongside science-based medicines as a representation that the homeopathic products are efficacious or are equivalent alternatives to the FDA-approved over-the-counter drugs alongside which they are displayed.”

As longtime Ars readers know, homeopathy is a debunked pseudoscience that dabbles with toxic substances intended to be diluted into oblivion. The practice rests on two nonsensical concepts: that a toxic substance that produces the same symptoms as a disease can be used to cure that disease (like cures like); and that the therapeutic potency of a substance increases with more and more ritualistic dilution, even far beyond the point at which not a single atom of the starting substance remains (the law of infinitesimals). In fact, some homeopaths believe that water molecules can have “memory” of substances.

At best, homeopathic products are watery placebos. At worst, they’re poorly diluted toxic potions. The latter isn’t just a hypothetical. In 2017, the FDA confirmed elevated levels of the toxic substance belladonna (deadly nightshade) in homeopathic teething products intended for infants. The FDA’s finding followed reports of 10 infant deaths and more than 400 illnesses connected to the products.

As such, consumer and advocacy groups, such as the CFI, have long railed against the sale of homeopathic products. And the CFI doesn’t mince words. “Homeopathy is bunk,” the organization wrote regarding its lawsuit against Walmart. “All evidence demonstrates that it doesn’t work at any level above that of a placebo. And it can’t work, unless every understanding of science we have is incorrect.” But, placed alongside legitimate medicines in pharmacy aisles, like those in Walmart and CVS,  they are “peddled to an unsuspecting public as a cure for everything from ear aches to asthma.”

In the two lower DC courts, the claim that the products’ placement in stores could mislead consumers about their efficacy gave judges pause. The judges argued that the placement on shelves with real medicine didn’t “constitute an actionable ‘representation’ as to efficacy” in regard to violating the CPPA.

But the appeals court judges disagreed. They noted that courts in the past have found that such non-verbal cues and imagery may indeed be considered misleading to consumers. For one example, they pointed to a 2017 case in which obsolete motor oils were sold on the same store shelf as non-obsolete motor oils. When the defendants tried to have the case tossed for “failure to recite a cognizable deceptive practice,” the federal district court dismissed the motion, suggesting that it considered the product placement a potentially deceptive practice. That was even despite the fact that the obsolete motor oils carried a warning on their back labels that said the oil “is not suitable for use in most gasoline powered automotive engines built after 1988.”