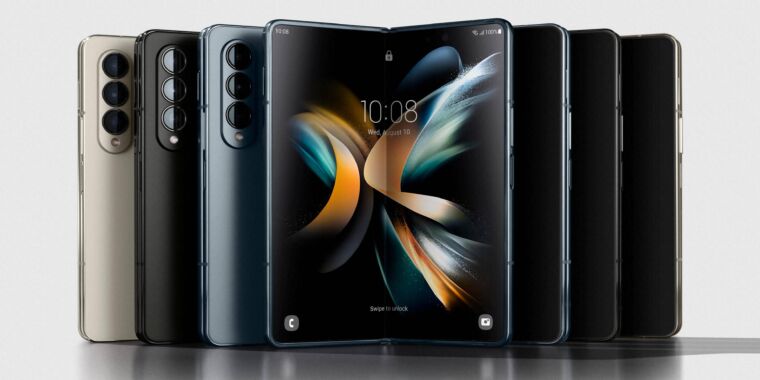 The Galaxy Fold 4 is Samsung’s flagship mobile device, and it launched just two months ago (are sales doing OK?). The Fold 4 folds up into a smartphone-style device with a front 6.2-inch, 120 Hz, 2316×904 outer OLED display and opens up into a sizable tablet with a 7.6-inch, 2176×1812, 120 Hz OLED display. Inside is flagship-class hardware: a Snapdragon 8+ Gen 1, 12GB of RAM, 256GB of storage, and a 4400 mAh battery with 25 W charging. The device is somehow water-resistant, and it sports an interesting under-screen camera on the inside.

The phone comes with Android 12L, which has some nice additions for tablet-style devices like the Fold 4. The biggest addition is the taskbar at the bottom, which lets you easily hop between apps. Samsung has the longest update plan in the Android business; you get four years of major OS updates and an additional year of security updates, though don’t be surprised if they arrive slowly.

It’s hard to recommend foldables too enthusiastically because you’ll still regularly find reports of the screens instantly shattering for no reason. Users report that Samsung may or may not cover broken screens under warranty, as it’s so easy to deny a claim by citing “abuse.” Samsung charges $500 for a screen replacement if it denies your warranty. If you pay for the Samsung Care+ extended warranty ($3 per month for a mandatory 36 months, or $108), you can get a screen replacement for a $29 deductible. Buying a Fold still feels like a gamble, but the discount will cover many of those extra costs, at least.

Ars Technica may earn compensation for sales from links on this post through affiliate programs.