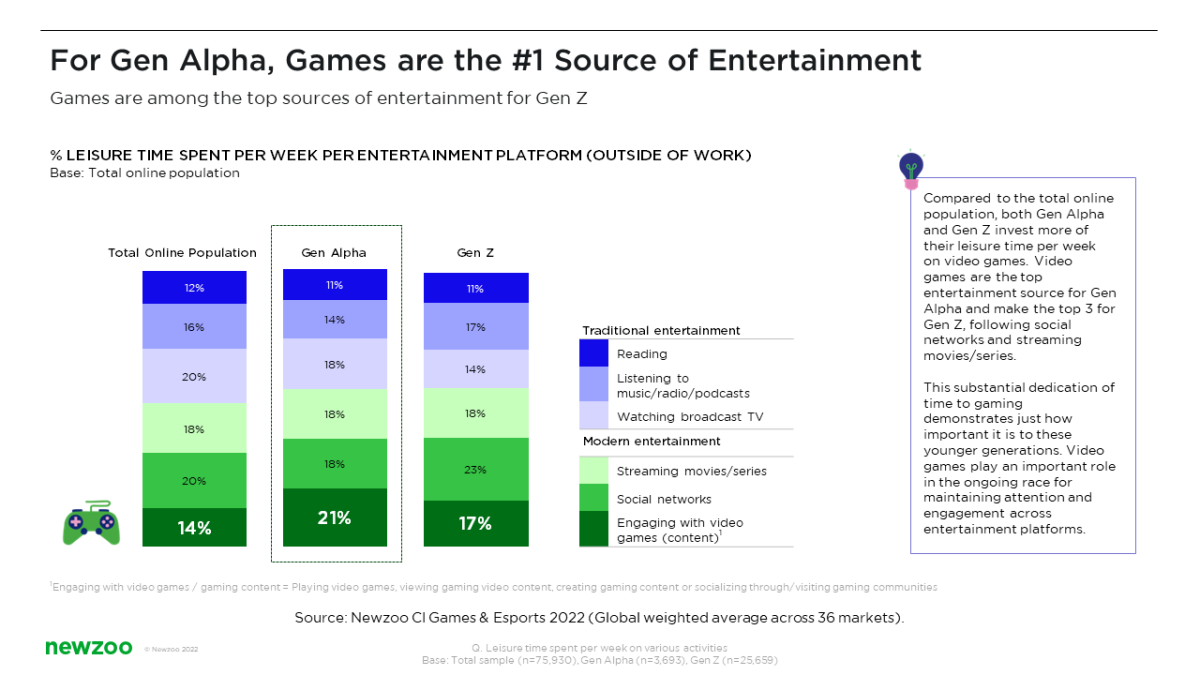 Newzoo has released its latest report on the gaming world, this one covering the behaviors of gamers of Generations Z and Alpha. According to the report’s findings, the youngest generations are very engaged with games, but not always with the act of playing them.

The report is titled “Gen Z and Gen Alpha: The Future of Gaming.” Newzoo defines “game enthusiast” as one who engages with games either through playing or viewing. This means that not all game time equals actually playing a game — it could mean watching someone else play a game on Twitch or YouTube.

Newzoo’s report draws information from 75,930 respondents across 36 countries. It defines Gen Z as those born between 1995-2009, and Gen Alpha as those born in 2010 or later. Not all of those respondents were the Gens Z or Alpha, as Newzoo also uses stats about the general internet population for comparison.

Both Gens apparently favor engaging with gaming content more so than other forms of media, with 88% of Gen Z’ers and 92% of Gen Alphas reporting playing games. They both appear to prefer mobile as a platform (69% and 73%, respectively report having played a mobile game within the last six months), but console has a slight edge for Gen Alpha.

It’s worth noting that, on the whole, both generations seem to have fairly diverse entertainment appetites. On Newzoo’s percentage of time spent on leisure activities, Gen Z’s gaming and gaming-adjacent activities tied with “listening to music/radio/podcasts” at 17%. For Gen Alpha, gaming takes up 21%, but the other options of streaming content, watching broadcast TV and social networks are all right behind them at 18%. So while gaming is an important part of both generations’ lives, it’s by no means a dominant one.

The social and monetary parts of gaming

According to the report, one of the most important aspects of games for these younger gamers is the social aspect. When asked what the most appealing feature of games is for them, 30% of Gen Z named “multiplayer and social aspects,” more than any other answer. 28% of Gen Alpha responded similarly, tying that option with “game theme or setting.” The most-popular answer for Gen Alpha was “exploration of open worlds” at 31%.

Newzoo’s report also includes a section on paying habits. It purports that Gens Z and Alpha are more likely to spend money on games, though it compares their numbers against the entire internet population rather than millennial or Boomer-specific stats. Supposedly they primarily spend via mobile, and both reported their primary reasons were to unlock content or to personalize their in-game characters and items.

One snag to this information is that the Gen Alpha gamers are, due to their youth, almost certainly not spending their own money on games. Newzoo later clarified to GamesBeat that the parents of the Gen Alpha gamers (who would all be pre-teens) answered the questions about the pay, as the ones who actually hold the purse strings. So the result for Gen Alpha could less reflect what they want, and more what their parents allow to them.