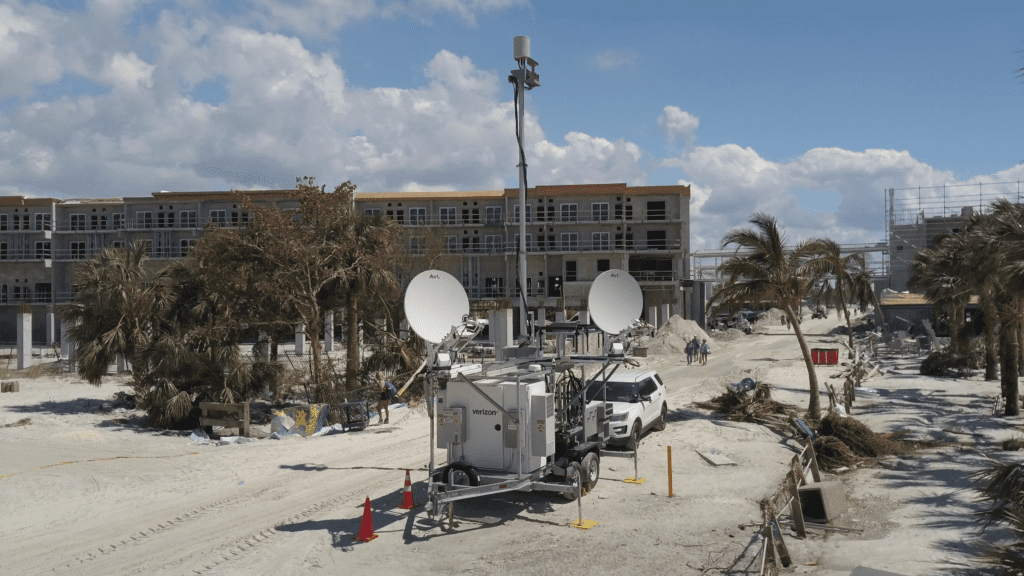 In the wake of Hurricane Ian, service providers continue to work at getting networks and cell sites back online in both Florida, which took to brunt of the storm, and in South Carolina, where it also made landfall.

According to the Federal Communications Commission’s tracking of cell sites in 30 counties in Florida and 30 in South Carolina:

-Four 911 call answering points have been impacted by the storm since it occurred, but information is being rerouted to maintain service. In two cases, rerouting is happening without accompanying location information for callers.

-Across the reporting areas in Florida, the number of sites down peaked at about 17% on Thursday, September 29 in the immediate aftermath of the hurricane and has seen steady improvement since. As of yesterday, operators were reporting fewer than 6% of their sites in Florida were still out.

-Still, that overall number doesn’t reflect the scale of the outages in specific counties. In Florida’s Desoto County, nearly 40% of sites were still out as of yesterday, with 33% of Hardee County’s sites down and 19.5% of sites in Lee County, which includes the hard-hit Fort Myers area and barrier islands.

-About 1% of the reported sites in South Carolina were down due to Hurricane Ian.

-In Florida, 444 sites were still down yesterday, with most of them out due to loss of power (260) and 173 out due to backhaul issues. Just 11 were reported as out due to damage.

Verizon said yesterday that its engineers have been focused on “orchestrating massive refueling efforts, completing site surveys of impaired cell sites, moving portable generators and mobile cell towers where needed and working repairs at numerous sites throughout the impacted areas of Florida” and that it already has tower crews repairing antennas that were impacted by hurricane winds. The carrier said that it has 13 mobile cell sites deployed and 10 in support of first responder communications, and that it also sent up a tethered drone with a coverage radius of 5-7 miles to provide coverage around Sanibel Island and the southern part of Pine Island. Verizon added that it is using satellite connectivity to provide backhaul to half a dozen cell sites where transport is out, is working on getting additional satellite-backhauled assets in place and is still seeing flooding affect some sites across the state.

AT&T reported that since opening its network on Thursday for roaming, it has handled more than 31.5 TB of traffic from other carriers and that overall, its “network continues to perform extremely well following Hurricane Ian.” (Enabling emergency roaming is one of the FCC’s priorities for enabling communications after a disaster.)

The carrier’s FirstNet team sent a compact, portable cell site to Pine Island via helicopter in order to provide communications on the devastated barrier island, and said that within minutes of setting it up, a resident had used the site to call family and let them know that she was safe.

AT&T said that it has deployed 10 Satellite Cell on Light Trucks (SatCoLTs) and six of those compact rapid deployables and that it has more deployables in transit Hardee, Lee and Orange counties. The carrier added that as of yesterday, it has dispensed more than 70,000 gallons of fuel for vehicles and generators to refuel sites, and that it has more than 90,000 gallons available in Florida and more than 20,000 just in Fort Myers. “Generators are refueled when needed without a hitch, unless we cannot reach a site,” it added. The company said that it has also restored service to about 69% of its wireline customers.

T-Mobile US, meanwhile, said on Saturday that the “vast majority” of its network was “up and running in impacted areas,” with “a small percentage of sites … still offline due to commercial power, third-party vendors experiencing issues or other factors.” The company said that it was deploying additional network assets as-needed where it was safe to do so. It also noted that it is running pop-up charging stations and Wi-Fi hot spots in Fort Myers and other cities that have been impacted by the storm so that people have access to connectivity and power.