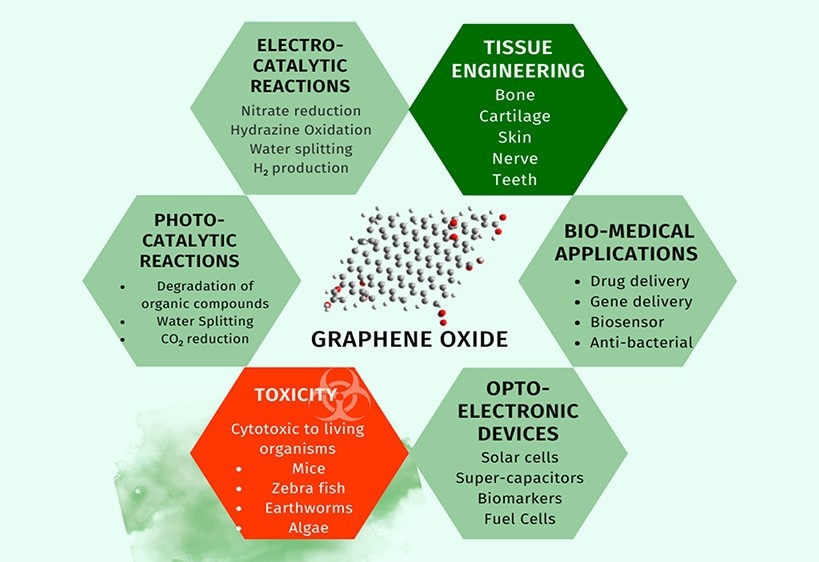 A recent study published in the journal ACS Omega provides an overview of the various graphene oxide production methods, characterization methodologies, and applications. The research also looks at the nanotoxicity of graphene oxide and its derivatives.

What is Graphene Oxide (GO)?

Graphene is a single-layered structure made up of hexagonal carbon atoms. Graphene and graphene-based substances are attractive materials for many applications because of their outstanding electrical and thermal conductance, high strength-to-mass ratio, and large surface area.

However, significant pi-pi stacking across layers causes graphene to combine and form a hydrophobic compound. To address this issue, graphene is usually oxidized via the Hummers process, resulting in the creation of graphene oxide.

Hummers and Offeman’s approach is the most commonly acknowledged method for synthesizing graphene oxide in large volumes. Sulfuric acid and potassium permanganate oxidize a combination of graphite powder and sodium nitrate in the Hummers process. Using this process, high-quality graphene oxide may be manufactured in hours.

In recent years, there has been a lot of interest in creating graphene oxide sheets with customizable shapes. This is because the characteristics of graphene oxide can be suitably modified by employing various molecules, packing designs, and intermediate spacing.

In recent years, graphene oxide and its derivatives have emerged as exceptional carbon-based materials with catalysis, biomedicine, and tissue engineering applications.

High-efficiency catalysis with minimal ecological effects has surfaced as a favored choice for many industrial processes. The oxygen-containing groups on the graphene oxide interface are very hydrophilic and chemically active. Moreover, the functional groups incorporated in graphene oxide serve as ideal host sites for a wide range of active catalytic molecules.

Graphene oxide has recently attracted much attention as a possible nanocarrier substrate in biomedical applications. Graphene oxide’s biological uses include gene and small molecular medication delivery. It may also be utilized to bio-functionalize proteins, as an anticancer drug, and as an antibacterial agent in bone implantation.

Graphene oxide has also shown promise in numerous tissue engineering domains, including the regulated development of stem cells and the release of active biological agents from stem-cell-containing delivery platforms.

Although graphene oxide and its derivatives are attractive prospects for key biomedical applications due to their flexibility, the potential use of graphene oxide in a biological environment necessitates a thorough understanding of these materials’ nanotoxicity.

According to the present research, the most significant nanotoxicity pathway of graphene oxide is the formation of reactive oxygen compounds in target cells. More research is needed to better characterize the nanotoxicity mechanisms, particularly those focusing on the biological interactions of graphene materials with cellular membranes.

Future nanotoxicology studies should take sample purity into account, particularly the existence of oxidative debris created during the early phases of production, which significantly affects the surface microchemical environment of graphene and graphene oxide. Moreover, the non-molecular behavior of graphene oxide must be included in nanotoxicity models because of the inherent variability of graphene properties.