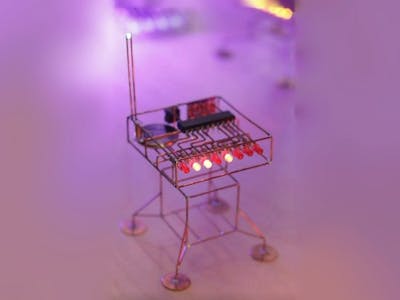 Bhoite’s latest circuit sculpture design is part of Bhoite’s ongoing “lunar lander” series, which borrows its aesthetic from the craft that landed on our nearest neighbor in space. It is, effectively, a second go-around at a design Bhoite showed off back in July — but where July’s version used a four-digit seven-segment display to read out the temperature in degrees Celsius, the new variant opts for a series of LEDs.

Those LEDs light up in a pattern, which can be read by those familiar with the concept of binary-coded decimal (BCD). The LED “display” is split into two four-bit numbers, each capable of showing a number between 0 and 15 in decimal — more than enough for the 0-9 required to form half of a two-digit temperature reading in Celsius.

Elsewhere in the sculpture, which uses rigid wire as both the framework and the circuit traces themselves, is a Microchip ATtiny861A microcontroller, an eight-bit chip with 8kB of program memory, 512 bytes of static RAM (SRAM), and a 10-bit analog-to-digital converter (ADC). The ADC goes unused in this particular project, however: The chip talks to the temperature sensor over the I2C bus.

More information on Bhoite’s iconic free-form circuit sculptures, which include the lunar lander family, satellite-inspired builds, and more abstract creations, can be found on his website; at the time of writing, however, the new BCD temperature sculpture had not yet been uploaded.