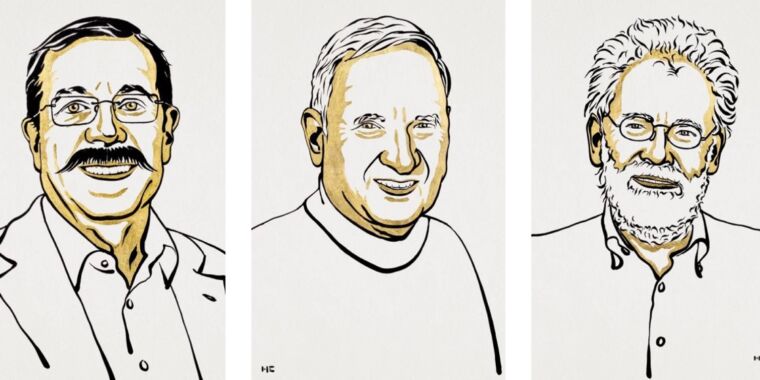 Cornell University physicist N. David Mermin once described quantum entanglement as “the closest thing we have to magic” since it means that disturbances in one part of the universe can instantly affect distant other parts of the universe, somehow bypassing the cosmic speed-of-light limit. Albert Einstein memorably dubbed it “spooky action at a distance.” Today, The Royal Swedish Academy of Sciences honored three physicists with the 2022 Nobel Prize in Physics for their work on entanglement. Alain Aspect, John F. Clauser, and Anton Zeilinger were recognized “for experiments with entangled photons, establishing the violation of Bell inequalities and pioneering quantum information science.”

When subatomic particles interact, they can become invisibly connected even though they may be physically separated. So knowledge about one partner can instantly reveal knowledge about its twin. If you measure the state of one, you will know the state of the other without having to make a second measurement because the first measurement determines the properties of the other particle as well.

There are many different ways particles can become entangled, but in every case, both particles must arise from a single “mother” process. For instance, passing a single photon through a special kind of crystal can split that photon into two new “daughter” particles. We’ll call them “green” and “red” (shorthand for more abstract particle properties like spin or velocity). Those particles will be entangled. Energy must be conserved, so both daughter particles have a lower frequency and energy than the original mother particle, but the total energy between them equals the mother’s energy. We have no way of knowing which is the green one and which is the red. We just know that each daughter photon has a 50-50 chance of being one or the other color. But should we chance to see one of the particles and note that it is red, we can instantly conclude that the other must be green.

Much of this was laid out in a seminal 1935 paper by Einstein, Boris Podolsky, and Nathan Rosen, introduced as a thought experiment to demonstrate that quantum mechanics was not a complete physical theory. If the result of a measurement on one particle of an entangled quantum system can have an instantaneous effect on another particle, regardless of the distance of the two parts, it’s called “nonlocal behavior.” But this appears to violate one of the central tenets of relativity: Information can’t be transmitted faster than the speed of light because this would violate causality.

Einstein and his collaborators had the rough idea that hidden variables could augment conventional quantum mechanics: as-yet-unknown local properties of the system that serve as hidden instructions “telling” particles which result should be determined in a given experiment. Einstein, Podolsky, and Rosen argued that this should account for the discrepancy, so that no instantaneous spooky action would be necessary. But they didn’t have a specific model to propose. And the physics community became convinced that hidden variables were impossible.

John Bell, however, questioned that rejection of hidden variables after reading up on the heated debates around the philosophical implications of quantum mechanics in the 1920s and 1930s. “I hesitated to think it was wrong,” he once said, “but I knew it was rotten.” Bell was inspired by David Bohm’s construction of a hidden variable theory that seemed to work perfectly well, but it came at a cost: the violation of locality.

Bell figured out a way to distinguish between theories that matched the experimental predictions of quantum mechanics and those that could not, and proved that local theories would never be up to the task. Astrophysicist and philosopher Adam Becker gave a brief summary of the significance of Bell’s work earlier this year during a Pioneer Works broadcast on the topic: