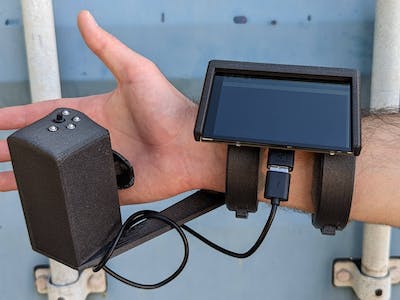 Most of the cyberdecks we see fit the form described in William Gibson’s Neuromancer novel. But atltvhead’s ComputeDeck-B3 is more akin to the Pip-Boy wearable computer from the Fallout series, thanks to its arm-mounted format. To make that format more practical, ComputeDeck-B3 includes a chorded keyboard.

That chorded keyboard is perfect for the ComputeDeck-B3, since it lets the user type with the same hand that the bracer sits above. That keeps their other hand free. It uses a combination of metal ball tactile buttons from Adafruit and Kailh Choc key switches. It also has a 5-way navigation switch for moving and clicking the mouse cursor. Atltvhead created the chorded keyboard for this project and used an Arduino Nano Connect RP2040 development board as the interface between it and the rest of the system.

The main system mounts to the user’s wrist like a bracer, with the screen facing naturally towards their eyes. That screen is a Pimoroni HyperPixel 4.0” TFT LCD touchscreen with a resolution of 800×480. It connects to a Raspberry Pi Zero 2 W single-board computer. Power for the system comes from a pair of 18650 lithium-ion battery cells. Both the keyboard and the most of the rest of the ComputeDeck-B3 utilize 3D-printed parts, and the resemblance to the fictional Pip-Boy is undeniable.

Atltvhead doesn’t say what he plans to use the ComputeDeck-B3 for. But based on his other work, we have to assume that he has something imaginative in mind.