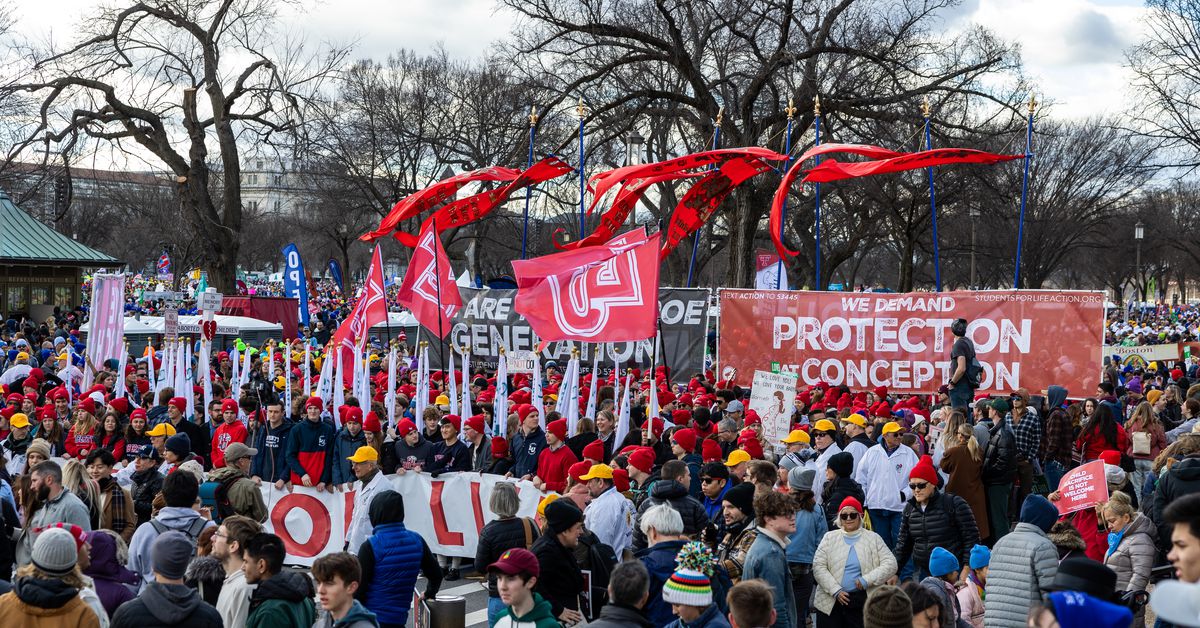 Friday’s March for Life, the most prominent national anti-abortion event, is the first since last June’s landmark Supreme Court decision to overturn Roe v. Wade, bringing into focus how much further activists want to go now that they’ve achieved the goal of overturning the national right to abortion. But despite a push for a nationwide abortion ban and other restrictions, current legal and political realities don’t support that vision.

National polling about abortion rights indicates that most Americans — 61 percent, according to Pew Research Center data from June — support abortion access to some degree. Voters in California, Vermont, Kansas, Michigan, and Kentucky all chose to protect abortion rights in their states after the Supreme Court dismantled the federal right to an abortion in the Dobbs v. Jackson case this summer. The Food and Drug Administration has expanded access to the medication abortion mifepristone, enabling certain pharmacies to dispense that medication with a prescription. Though some states have enacted, or attempted to enact, draconian anti-abortion measures, legal challenges have sometimes stayed those decisions or invalidated them entirely.

Yet politicians continue to push federal anti-abortion measures such as Sen. Lindsey Graham’s (R-SC) September proposal for a national ban after 15 weeks of pregnancy. States legislatures, too are trying to enact restrictive laws like Georgia’s six-week ban and Texas’s near-total ban on abortion, creating an environment in which, as legal historian Mary Ziegler told NPR’s Fresh Air on Tuesday, “what was once a constitutional right not very long ago is now a crime in large swathes of the country.”

However, now that activists have achieved the end of a constitutionally-protected right to abortion, there’s no overarching goal, but rather a series of smaller, disparate ones — some of which are proving difficult to accomplish.

Anti-abortion activists got what they wanted — for now

Decades of anti-abortion activism — the 50th anniversary of the March for Life is almost exactly 50 years to the day after Roe was decided — culminated in the US Supreme Court’s decision in Dobbs. The energy, funding, and influence of the movement had been oriented toward this exact goal; a network of well-organized and powerful right-wing groups including the Susan B. Anthony Foundation and the National Council for Women, two anti-abortion advocacy organizations, had consistently poured money and resources into the fight since the 1980s, and now their efforts finally paid off.

Now, some anti-abortion activists are demanding more. “We don’t end as a response to Roe being overturned,” Jeanne Mancini, the president of the March for Life Education and Defense Fund, told the New York Times Friday. “Why? Because we are not yet done. Let me say that again: We are not yet done.”

Absent an overarching goal, leaders in the movement had expressed concern that anti-abortion activism would fizzle — and some are concerned that, without sustained effort, that could still happen.

“We have to work very hard to make sure we keep our eye on the prize, that we don’t say, ‘Hey, Roe v. Wade is overturned. We’ve done our work. Now it’s time to go home.’ I would say, to be transparent, that was a concern of ours,” Marjorie Dannenfelser, the president of Susan B. Anthony Pro-Life America, said on Friday.

Still, anti-abortion leaders said they were pleased by attendance at this year’s march taking it as an indication that there’s still energy around the movement. But how that energy will be directed is the question.

State-level legislation has always been a priority; that’s how some of the most onerous restrictions on abortion have come into effect since Roe was overturned. There could be additional state-level efforts to restrict abortion by legislative action or to explicitly amend state constitutions to deny the right to abortion.

As Vox’s Marin Cogin wrote Friday, those kinds of state-level actions upended the lives of many women in the wake of Dobbs:

Overnight, a generation of women born with the constitutionally protected right to an abortion saw it taken away. While earlier restrictions and legal challenges had meant that some women, particularly in the South, were living with a de facto ban before the fall of Roe, formally losing that right has had serious implications for people of reproductive age, plunging many women into uncertainty and forcing them to consider how a rapidly shifting political landscape could affect some of the biggest decisions of their lives.

For people trying to navigate a post-Roe world, alternatives to surgical abortion, such as medication abortion and even contraception, could become a target for the anti-abortion movement. Activists could seek to restrict access to the medication mifepristone, which is used to end a pregnancy within ten weeks of gestation. As Politico reported earlier in January, some anti-abortion groups are planning pickets in front of pharmacies in states where mifepristone will be available come February; some states, including Missouri and Kansas, are even considering bans on obtaining mifepristone by mail or at a pharmacy.

Anti-abortion groups could also target hormonal contraception. That might look slightly different than legislative actions around medication and surgical abortion — as an investigation from the outlet Reveal found, such actions could also include undermining trust in, or providing unreliable alternatives to birth control like the pill or IUDs.

As Dr. Taniqua Miller, an OB-GYN and professor at the Emory School of Medicine, told Vox’s Cogan, “I think that there is the thought: Will there be a slippery slope? Will contraception be available in the future? And I don’t think that we can really speak to that.”

Graham’s 15-week proposed ban has thus far failed to gain significant political or legislative traction; in a tightly divided Senate and a House with a weak Republican majority, the likelihood of passing that kind of legislation right now is low. And seeing anti-abortion candidates’ poor performance in the midterms seems to have mitigated any real political appetite for such a ban.

In the near future, efforts to further restrict abortion in the US will likely be more piecemeal, focusing on a variety of different measures like prosecuting abortion providers, as Texas’s abortion ban allows.

Whatever energy the movement maintains, the focus will be splintered in different directions, inviting the possibility of stasis, indecision, and infighting. What’s more, though activists have grabbed the brass ring of overturning Roe, actually legislating abortion bans or restrictions has become something of a game of whack-a-mole when that legislation comes up against court challenges and the will of voters.

There are going to be road blocks for anti-abortion activists

But the Dobbs decision didn’t make abortion illegal across the country, it just negates the federal right to abortion under the 14th Amendment, which outlines the right to due process and legal protection under the law. In the extremely conservative, traditionalist reading of the Constitution that Justice Samuel Alito employed in writing the majority opinion in Dobbs, the right to abortion under the 14th Amendment doesn’t exist because it’s not explicitly in the text. It also, by proxy, negates Planned Parenthood v. Casey, the 1992 case which amended Roe v. Wade to allow states to place some restrictions on abortion access, but none that would be overly onerous.

“We have a tendency to think of banning abortion as an on-off switch,” Rachel Rebouché, the dean of Temple University’s Beasley School of Law, told Vox back in September. But in a post-Dobbs landscape, the legal complexities around abortion legislation have only increased, she explained at the time.

The Dobbs decision punts laws around abortion access down to the state level, where many legislatures — like Georgia’s, for example — already had laws on the books severely limiting abortion access. With Roe and Casey gone, those laws could ostensibly go into effect, but they are far from settled. In Indiana, for example, a highly restrictive abortion ban implemented shortly after Dobbs was decided is wending its way through the state’s courts. That legislation has been stayed since September, as a lower court judge determined that the ban likely violated the state constitution’s right to privacy.

In cases like Indiana’s, abortion clinics can reopen while challenges to abortion bans make their way through the courts, but it’s a delicate tightrope to walk. As clinics in Arizona experienced this past fall, the ability of abortion clinics to provide care can change by the day, causing chaos and serious distress for providers, not to mention the people seeking care. And in states like Idaho the bans are still allowed to go ahead, albeit with some changes, despite those legal challenges.

Taking a look at the November 2022 midterms, too, is indicative of some of the challenges anti-abortion activists will face as they try to push the movement forward. As Linda Greenhouse, a former New York Times reporter wrote in an opinion piece for the paper, some of the most extreme anti-abortion candidates for office, like Doug Mastriano, who advocated an abortion ban without exceptions when he ran for governor of Pennsylvania, lost their contests. Even those who initially trotted out extreme positions and later tried to tone them down, like Blake Masters in his US Senate race, were often unsuccessful.

Even this year’s March for Life didn’t see the big political names it’s drawn in the past, as Politico reported; House Majority Whip Steve Scalise was the highest-ranking elected Republican to speak. He promised that the Dobbs decision was “only the first phase of the battle” against abortion, and in a sense he’s right; however the movement tries to move forward after its post-Roe victory, any further restrictions won’t go through without long, complex, and often unpopular fights.