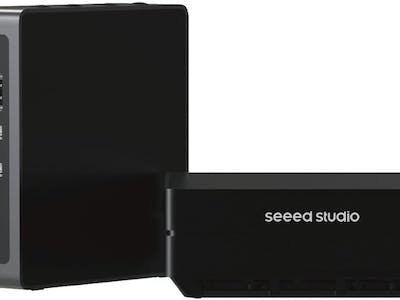 Seeed Studio has announced an update to its reComputer range, with a pair of new models powered by the buyer’s choice of NVIDIA Jetson Orin Nano or Orin NX edge AI system-on-module.

“Seeed Studio has introduced the reComputer full system and carrier board to support the NVIDIA Jetson Orin Nano system-on-modules (SoMs),” says Elaine Wu of the company’s latest product launch, “which set a new standard for entry-level edge AI and robotics, as announced at NVIDIA GTC.”

Seeed Studio has announced a refresh for its edge AI reComputer range, with the bulk of the new models to launch early next year. (📷: Seeed Studio)

Both the new reComputer J3010 and J3011 are built around the J401 carrier board, which breaks out the functionality of the system-on-module installed within and provides a full-size HDMI video output, two MIPI CSI camera inputs, a gigabit Ethernet port, four USB 3.2 Type-A ports, a single USB 2.0 recovery port exposed as Type-C, an M.2 M-key slot with Non-Volatile Memory Express (NVME) support, an M.2 E-key slot, a 40-pin expansion header, a real-time clock module, a CAN bus, and a connector for a cooling fan.

This will be housed in a custom aluminum case matching the design of the company’s existing Jetson-based reComputer range, Seeed has confirmed, with a heatsink helping to keep the temperature of the system-on-chip at the heart of the Jetson Orin module to manageable levels.

Arguably the most interesting models in the new reComputer range will be powered by the Jetson Orin Nano — unveiled by NVIDIA during the GPU Technology Conference (GTC) earlier this month. Positioned as an affordable entry point for high-performance edge AI workloads, the modules offer either 20 or 40 trillion operations per second (TOPS) of compute performance for sparse workloads and either 4GB or 8GB of RAM. With a claimed 80x performance boost over NVIDIA’s previous parts, they promise a big gain for edge workloads.

The new reComputers are to be powered by the buyer’s choice of entry-level Jetson Orin Nano or more powerful Orin NX modules. (📷: NVIDIA)

Those looking for higher performance can opt for the Jetson Orin NX variants, which increase the performance to 70 TOPS and 100 TOPS for sparse workloads in 8GB and 16GB varieties. In both cases, the modules come with 1,024-core Ampere-architecture graphics processors with 32 dedicated Tensor processing cores.

While NVIDIA has confirmed pricing for the Jetson Orin Nano modules at $199 for the 20 TOPS/4GB and $299 for the 40 TOPS/8GB models, Seeed Studio has not yet confirmed pricing for its reComputers built around them — with more details expected just ahead of their launch in the first quarter of 2023. The reComputers built around the more powerful Jetson Orin NX 8GB and 16GB modules, meanwhile, will launch between the end of this year and Q1 2023.