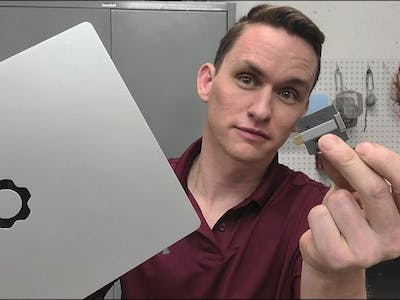 The Framework modular laptop promises the ability to add and remove features on a whim using Expansion Cards — and semi-pseudonymous maker Sean N. has built one of his own, to add Apple MacBook-style magnetic charging capabilities.

The original Framework was launched two years ago as a laptop with a difference, designed to be easy to maintain, upgrade, and expand. The release of the laptop itself was followed by the Framework Mainboard, which — as the name implies — took the innards of the laptop and made it available as a single-board computer that has powered home-brew creations including Penk Chen’s Mainboard Terminal and Richard Sutherland’s Framedeck.

Sean’s project, though, revolves around the laptop itself. A 3D-printable Expansion Card model serves as the basis, with Krylon metallic silver paint as a finish to match the metal laptop body, and hosts an off-the-shelf magnetic charger adapter inspired by Apple’s popular MagSafe design. With the other half of the magnetic charger connected to a USB Type-C charger, the laptop can be powered by simply snapping the two halves together — with the cable easily disconnecting should it get snagged in-use.

“A little note on the [3D-printed] part,” Sean adds for anyone interested in repeating the build. “Since it is so thin I would recommend, after you feel good about the part that you printed and [have] tested it, put a little superglue here and here so the whole thing stays together as one unit. It’ll also make it much more rigid.”

Sean’s video of the project is available on his YouTube channel, along with links to the parts used and the STL Expansion Card file for 3D-printing.