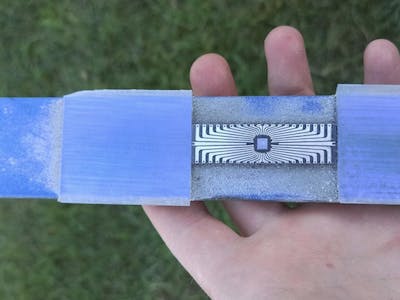 Redherring32 may be familiar to regular readers as the driving force behind the OpenTendo, an open-source recreation of the Nintendo Entertainment System motherboard. Designed to be completely compatible with the original front-loading console yet with enhancements including expansion-port audio as standard, the OpenTendo used original components — but Redherring32’s next project, the TinyTendo, needed to make a change.

The TindyTendo, which the maker has been developing since 2019, is designed to put full NES console capabilities into a Game Boy-style handheld. To do so, it shrinks the motherboard down considerably — so much so that, sadly, there’s no room for the original chips from a NES. The solution: Rather than switch to emulation, the TinyTendo uses the original chips — cut down into ultra-compact surface-mount versions.

For this, Redherring32 uses a vice to hold the CPU or PPU in place then attacks its underside with a Dremel rotary multi-tool and sanding drum. As the original dual in-line pin (DIP) package is sanded away, the connecting traces are exposed — followed, eventually, by the tiny silicon die at the heart of the package. Once exposed, the die and just enough of the connecting traces are kept before slicing off the excess — followed by sanding the edges smooth.

A finished TinyTendo board is, effectively, a genuine NES console in miniature. (📷: Redherring32)

The result is a smaller, thinner version of the chip in a quasi-quad-flat no-leads (QFN) package — only identifiable as originally having been something larger by the truncated markings on the top. Once suitably tested, using a 3D-printed test socket to speed the process, the resulting repackaged chip can be soldered into place on the TinyTendo motherboard — behaving exactly like the original DIP version but in a far smaller footprint.

More information on the process is available in Redherring32’s Twitter thread.