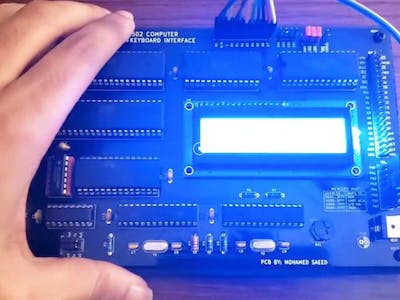 Maker and retrocomputing enthusiast Mohamed Saeed has built a single-board computer powered by a MOS Technology 6502 — building on earlier projects by others to integrate serial connectivity, a composite video output, and keyboard input.

“This is a modified Ben Eater 6502 Computer PCB board that I’ve been working on,” Saeed explains of the project. “It has a serial I/O [Input/Output] port so that I can send and receive data to a display like my laptop, LCD, or CRT monitor. I used Grant Searle’s video and keyboard interface circuit and found a blog that helped with setting up the serial I/O using a [MOS Technology] 6551 ACIA [Asynchronous Communications Interface Adapter] chip.”

The custom PCB is all Saeed’s work, but it builds on the efforts of others. The heart of the system is a MOS 6502 computer originally designed as a breadboard project by maker Ben Eater, created to showcase vintage computing technologies and the ability to build up from an eight-bit microprocessor into a fully-functional computer.

To this, Saeed has added a keyboard and video interface based on a design by Grant Searle, built around the user’s choice of Microchip ATmega32 or ATmega328 microcontroller. Using this, it’s possible to work directly on the single-board computer without the need for a serial terminal: a composite connector at one end provides 40 or 80 column text and bitmap graphics modes, while a PS/2 keyboard interface allows for direct input.

“So far It’s running a version of Wozmon [6502 monitor] that I found on Reddit,” Saeed writes of the machine. “I eventually want to port a BASIC interpreter just like the Apple 1 but I’ve just been having trouble using the vasm assembler to do that, so I’m currently looking into different assemblers (like RetroAssembler and cc65) and hopefully I can get that working soon.”

A video demonstrating the build is available on Saeed’s YouTube channel, with more information available in the project’s Reddit thread; Saeed has not released design files for the PCB, though suggests partial sources — minus Searle’s interfaces — may be uploaded to GitHub in the near future, alongside an earlier eight-bit computer design.