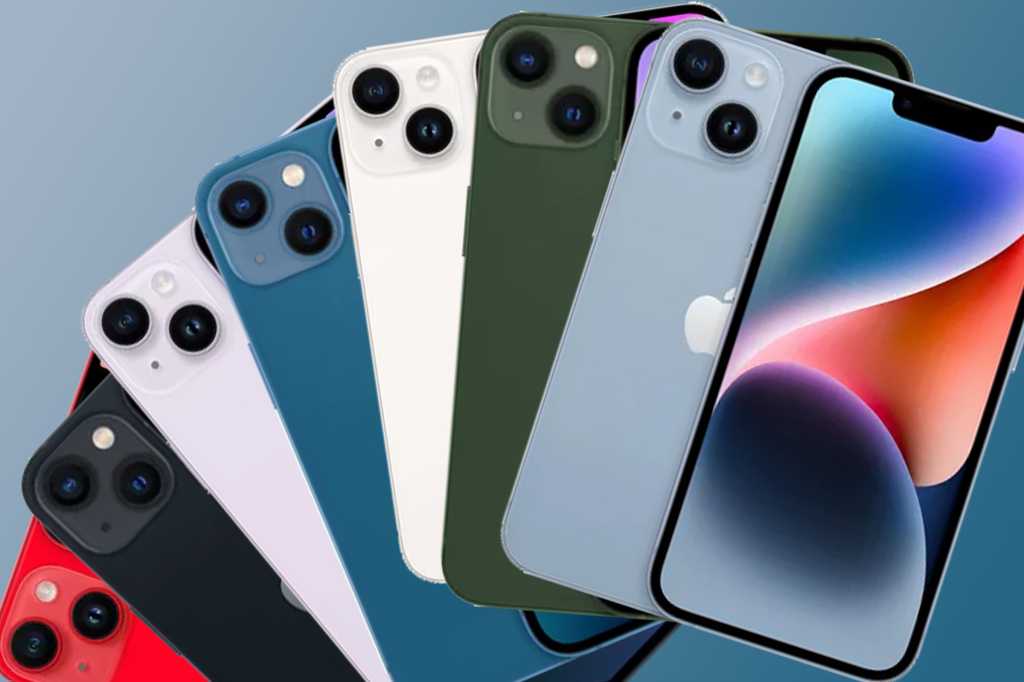 At a time when people are trying to avoiding spending more than they need, there’s an interesting dilemma for those thinking about upgrading an old iPhone. Instead of buying the iPhone 14 you can save $100/£100 and buy an iPhone that, while a year old, shares the same look, a very similar processor, and many of the features of the newer handset. But there are still meaningful differences that justify the difference in price. We’ll help you decide which one to buy.

We don’t usually jump straight to the cameras in these comparisons, but that’s by far the biggest difference between the iPhone 14 and iPhone 13. The iPhone 14 has two cameras on the back, just like the iPhone 13, but the newer model includes a faster aperture (ƒ/1.5 rather than ƒ/1.6) and a larger sensor on the main camera to bring better overall performance and improvements in low-light shooting.

The iPhone 14 also benefits from a new Photonic Engine computational system that helps capture more detail in challenging light and aids features such as the new Foreground Blur in Portrait Mode. The improvements in low light photography don’t just mean that the resulting photos are better, it means that when you are taking a photo in low light you don’t have to hold the iPhone steady for as long.

There’s also an Action Mode for video shooting that is designed to improve stabilization when you are recording video while moving. This works really well and is a feature that will make a difference to almost anyone, where past video features, such as the Cinematic Mode that arrived with the iPhone 13, have rather fallen flat (we’ve never quite worked out where we would benefit from Cinematic Mode).

It’s not just the cameras on the back of the iPhone 14 that are better than the those on the iPhone 13. The selfie camera—aka the TrueDepth camera used for FaceTime and Face ID—has also been upgraded on the front of the iPhone 14. This camera gains autofocus and a wider aperture, which will lead to improved low-light performance.

If you primarily use your iPhone for photography these are all excellent reasons to choose the iPhone 14 over the 13.

Another difference between the two phones is the color finishes you can choose from. The iPhone 13 colors tend to be darker than those of the iPhone 13. For example the iPhone 14 has a pale blue option compared to the deep blue of the iPhone 13, and even the Product Red finish for 2022 looks brighter than usual. Plus pink has been switched for purple.

There are two other things that the iPhone 14 offers that the iPhone 13 doesn’t, although one of them will only make a difference to you if you are based in the U.S. or Canada, and the other will only matter if you are in a car crash. The first is the a new ability to make an emergency call via satellite – so if you are in trouble and don’t have cellular coverage you will still be able to call the emergency services as long as you have good enough visibility of the sky. It’s something you probably won’t need to use, but could make a big difference if you were own such a situation.

Similarly the Crash Detection feature (which is also available on all of the 2022 Apple Watches) is something you will hopefully never need to benefit from, but it could have the potential to save your life. The iPhone 14 can actually detect if you are in a car accident and will contact the emergency services on your behalf.

These benchmarks demonstrate that the iPhone 14 delivers decent speed boosts compared to the iPhone 13.

If you play games or use other graphics intensive apps the extra GPU core might matter to you, but for typical users it may not make any difference at all.

One extra hour of battery life doesn’t sound all that exciting, although if your journey home from work is an hour then it may well be the difference between your iPhone running out of battery and it hanging on until you get home. Not that 20 hours is a realistic guide to battery length – that all depends on what you are using your iPhone for. The most important thing is probably how long you will need to plug your iPhone in for to get enough power to last a day at work – and that’s the same for both iPhones: Up to 50% charge in 30 minutes with 20W adapter.

There’s one other comparison between the two iPhones that might not be immediately obvious, but should certainly be considered. While both phones start at 128GB for storage, price is still an issue. On one side, we have the iPhone 14 for $799/£849 with 128GB storage, on the other we could consider an iPhone 13 with 256GB storage, for $799/£859. There are many for whom extra storage will trump the additional features offered by the iPhone 14.

Just how much storage do you really need though? As we discuss in a separate article, you may not need as much storage as you think you do thanks to services such as iCloud and Apple Music. However, in our experience, if the storage on your new iPhone is smaller than that of your old iPhone there are challenges to be faced when transferring the data between the iPhones.

If you are happy to sacrifice storage for the the features of the iPhone 14 read our story on how to free up space on an iPhone for tips to reduce the amount of space you are using before you make the move.

While that’s a fair amount of difference between the two iPhones, there is much more that’s the same. In fact these two iPhones are so similar that it is a bit of a challenge to tell them apart.

As we’ve already explained, there are new camera features on the iPhone 14, but there are also a lot of camera features that both iPhones share, so choosing the iPhone 13 won’t mean sacrificing photography features such as the Portrait Mode and Portrait Lighting effects, Photographic Styles, Cinematic Mode, and HDR video recording with Dolby Vision in 4K at 60 fps.

If you are clumsy neither of these phones are more durable than the other. Both have water resistant to a depth of 6 meters for up to 30 minutes. They both feature a Ceramic Shield front, which should mean that the glass on the front is less likely to smash if you drop it. However, both feature a glass back (which is necessary for MagSafe charging) and if you drop your iPhone with no case on then you are pretty much guaranteed to break the glass on the back. So our recommendation is that you pop your new iPhone in a case (see: Best iPhone cases).

iPhone 14 or iPhone 13: Which phone is the better buy?

That’s not to say that there isn’t a processor bump for the new phone, as you can see from the benchmarks this chip means the iPhone 14 is more like the iPhone 13 Pro, so it is better than the iPhone 13. It’s just not a whole generation better.

But should the focus be on the processor? When considering a new iPhone the capabilities of the processor could be seen as less important than how long Apple will support that processor for. We can assume that the iPhone 13 and 14 will both lose iOS compatibility at the same time, but this won’t be a concern for many years.

The big difference between the two iPhones is the improved camera capabilities in the iPhone 14, which include better (faster) low light photography and the Action Mode. The Action Mode is definitely the marquee feature and one many people are likely to use, unlike the Cinematic Mode that arrived with the iPhone 13. For our money, Active Mode is the only reason to upgrade to the iPhone 14, but it’s a good one. If you don’t take many videos or care about Action Mode, you can safely stick with the iPhone 13 and save a few bucks.

For more help deciding on the best iPhone for you, read our complete guide to all the iPhones Apple sells. We also have the following reviews: