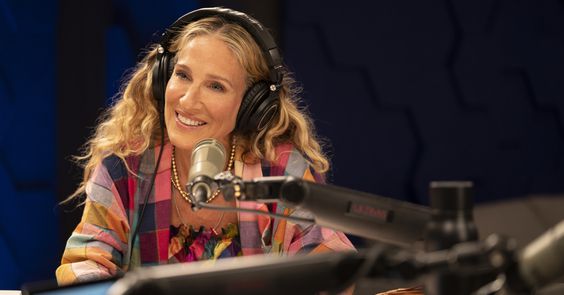 Welcome to Noticed, Vox’s cultural trend column. You know that thing you’ve been seeing all over the place? Allow us to explain it.

On the Sex and the City revival And Just Like That, the X, Y and Me podcast co-hosted by Che Diaz (Sara Ramirez) and Carrie Bradshaw (Sarah Jessica Parker) is essentially a live radio show. Che works a soundboard with “trigger warning” and “woke moment” sound effects, and Bradshaw takes live calls.

Similarly, Bobby (Billy Eichner) in the upcoming movie Bros is a part-time podcaster who, like Bradshaw, fields a live call while ostensibly recording. This conflation of podcasting and call-in shows also popped up back on The Bold Type, as Scarlet Magazine’s resident man, Alex (Matt Ward), hosted “Ask Alex Live.”

The problem that podcasts are largely prerecorded and not live isn’t the only issue, however. The protagonists of Only Murders in the Building become true crime podcasters but aren’t ever seen putting the podcast together aside from recording their lines. C’mon C’Mon centers on an audio journalist played by Joaquin Phoenix who doesn’t seem to use essential podcasting tools like headphones. In Ghostbusters: Afterlife, a child named Podcast (Logan Kim) doesn’t seem to know how a mic works.

Why you’re seeing it everywhere

The easy answer is that podcasting is everywhere.

In two years, podcasting will reportedly be a $4 billion industry, according to The Verge. That astronomical amount of money isn’t just about the number of podcasts in production, or the new programs created year over year, or the massive audiences they bring. That sum also signifies the amount of money companies spend advertising on those podcasts to tap into very loyal audiences. Lots of people listen to lots of podcasts, and podcasts are a fixture of many people’s everyday lives.

Since movies and television shows are often about fictional people in real-life settings, it makes sense that some would reflect podcasts and podcasters. Hollywood loves shows about media types, ranging from newspaper journalists (less glamorous), to columnists (slightly more glam), to radio hosts and magazine editors. Podcasters fit into that niche too, and dare I say, some people think podcasting and being a podcaster is cool.

The problem that arises is that podcasting itself isn’t very glamorous. There’s hours of research, scripting, recording, scheduling, and editing that go into each podcast episode. A hunched-over, broken-down podcaster on their computer editing the same piece of audio doesn’t exactly make for fun television.

Hence the desire to jazz up podcasting, perhaps making it more fun, chatty, and spontaneous — like radio.

That seems to be the mentality behind And Just Like That, which sees sex columnist Carrie Bradshaw taking on a new profession as a sex advice podcaster on X, Y, and Me. In the finale of And Just Like That, Carrie has her own podcast and uses it to answer live calls and dispense advice. It makes for a more dynamic scene and allows Carrie to seem more human. If she were just answering a question on the air, it would turn into a monologue. And Just Like That essentially recreated The Dr. Frasier Crane Show.

A realistic remedy would be for the show to say that Carrie is on Twitch or some kind of streaming social media platform where she could ostensibly host a call-in show (R.I.P. radio), but that doesn’t have the same recognition that podcasting does.

Spicing up a podcast is one way to make podcasting seem more fun than it is in real life. Many shows elide the process altogether. When I asked Vox’s audio team if they saw depictions of their jobs that seemed out of touch with reality, they pointed to how easy Only Murders in the Building made it look with its characters never actually assembling the audio they record in a specific way or how in C’mon C’mon Joaquin Phoenix’s character doesn’t use headphones (and therefore isn’t listening to the audio he’s recording). One also pointed out how there’s an actual child named Podcast in the new Ghostbusters movie, but said he doesn’t know how to hold a mic (and would pick up all kinds of unwanted audio) and thus is a failure to their name. Another pointed out how podcasters in the 2018 Halloween remake commit an egregious journalistic oops and set Michael Myers free.

While audio folks I spoke to laid out their gripes, they also conceded that the general public would maybe not be particularly invested in seeing a harried editor splice audio for three hours, nor is there a blazing desire to see a producer instruct a guest to plug their headphones into the right jack. Maybe some things aren’t made for TV or the movies, and the minutiae of podcasting may just be better left in real life — where it’s heard and not seen.