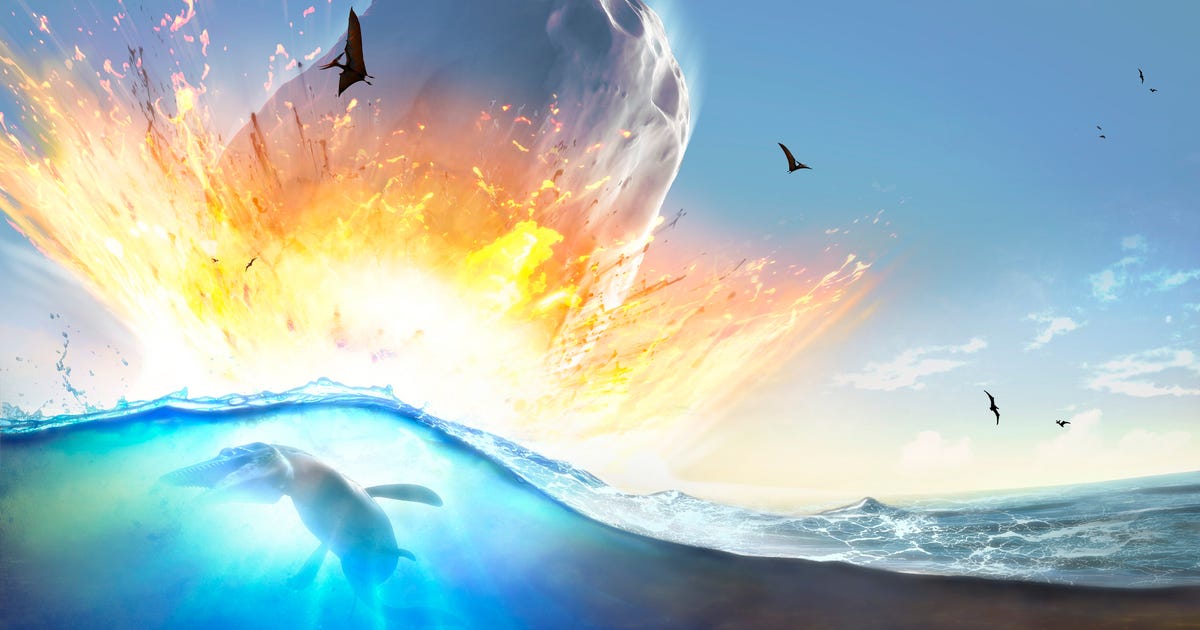 The eight-mile-wide asteroid that ended the reign of the dinosaurs also inspired one of the most cataclysmic tsunamis, with monster waves a mile high crashing into coastlines across the planet.

Scientists have long researched the Chicxulub impact crater, which lies under the Yucatán Peninsula in southern Mexico, which was created by a planet-altering impact some 66 million years ago. The impact, formed by a rock smashing into the Earth at about 27,000 miles per hour, upended life on Earth.

We know the immediate aftermath of the collision was devastating. Recent research has shown the oceans rapidly acidified and the Earth’s climate was greatly disrupted. It ignited trees and plant life thousands of miles away. That’s not so surprising, considering the force of the impact has been likened to the detonation of 10 billion atomic bombs.

In a new study, published in the journal AGU Advances on Oct. 4, researchers used computer models to understand how Earth’s oceans were affected. To cut a long story short: It was a bad day to be a dinosaur.

“Any historically documented tsunamis pale in comparison with such global impact,” the study authors note in a press release.

Within just two minutes of the impact, a wave almost 3 miles high was birthed by the ejected material. Only a few minutes later it had subsided to a third of that size but the wave traveled about 140 miles across the ocean in every direction. On top of that, ejected material that had been blown into the sky and had then splashed back into the ocean created their own waves that reached miles into the sky.

The team used a supercomputer and two tsunami models to assess just how humongous they might have been. The models, they say, gave almost identical results and showed most coastal regions in the world would have been impacted to some extent. They found that, within two days, the ancient Earth’s coasts were being battered by humongous waves.

I reiterate: It was a bad day to be a dinosaur.

But computer modeling can only take you so far. To attempt to verify what the model revealed, the team also looked at deep ocean cores, which provide a historic layered record of Earth’s geologic history. They focused in on an area known as the K-Pg boundary, a signature in the layers that corresponds to the end of the Cretaceous period, after the asteroid hit.

Reviewing 120 deep ocean core records from around the world, they were able to show the impact had disturbed ocean basins across the planet. The impact had created such forceful undersea currents that the sediments were all jumbled and eroded. That gave the team more confidence in the results.

They’re hoping to follow up the study by modeling how the waves crashed into coastlines across the world and show how inundated they became. As I understand it, they want to know just how bad a day the dinosaurs had.

Hopefully humans will never have to experience such a fate post-asteroid impact — because we’re designing ways to prevent the impacts in the first place. In late September, NASA tested one way to deflect a potentially hazardous space rock hurtling towards the Earth: Smashing into it with a spacecraft. Data from the mission, known as the Double Asteroid Redirection Test, is currently being analyzed and should tell scientists how fruitful such a collision would be at defending the Earth.