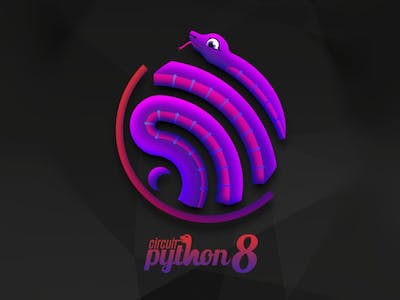 A beta for Adafruit’s CircuitPython 8.0.0 release is now available to download, bringing with it a new wireless in-browser workflow, smart status bar, and initial support for bulk analog input functionality — among other improvements.

“CircuitPython 8.0.0-beta.1 [is] a beta release for 8.0.0,” writes CircuitPython core developer Dan Halbert of the latest version. “It is relatively stable, but there will be further additions and fixes before final release.”

CircuitPython 8.0.0 is now available in beta form, bringing with it a new Wi-Fi web workflow. (📷: Adafruit)

The biggest new feature for CircuitPython 8.0.0 is the inclusion of what Halbert describes as its “Wi-Fi workflow,” designed to make it easier to get started with the software. Using the new Wi-Fi workflow, it’s possible for a user to discover CircuitPython devices, browse their filesystems, upload new code, download existing programs, edit files, and launch a serial or REPL connection — all without the need for a physical connection.

Another major feature is the inclusion of a one-line status bar, which appears in the title of a terminal window or the top line of an attached display, which offers information on the last exception caught, CircuitPython version, and connection status. For those who use the Mu or Thonny integrated development environments (IDE), support is promised in the near future.

For Raspberry Pi RP2040 users, there’s initial support for bulk analog inputs using analogbufio — to be rolled out to other microcontrollers in the future — plus what Halbert calls a “preliminary implementation” of Wi-Fi support on the new Raspberry Pi Pico W.

Other changes include camera support on Espressif ESP32, ESP32-S2, and ESP32-S3 microcontrollers, the ability to preserve pin states during deep-sleep on Espressif platforms, full-range anlog inputs, the ability to pass filenames straight to WaveFile and MP3Decoder for playback, a fix for printing out whole-number floats “exactly and correctly,” and support for additional boards including the STM Nuclea-F446RE, Unexpected Maker’s TinyPICO range, and the BananaPi BPI-BitS2 and BPI-Leaf-S3.