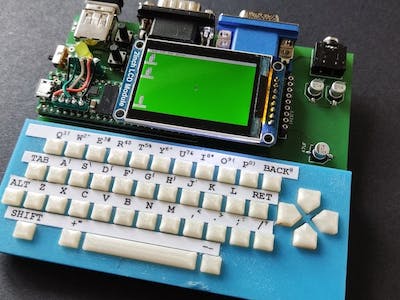 When someone wants to get into retro computing, they generally have two options: hunt down and buy original hardware or emulate vintage systems on a modern computer. Software to perform the latter is often open source and free, but doesn’t provide the complete experience. Vintage hardware is hard to find, is often expensive, and tends to be delicate and prone to failure. To get the best of both worlds, you may want to consider building Jean-Marc Harvengt’s T-COMPUTER.

The T-COMPUTER is a physical device meant to make the most of the M.CU.M.E (Multi CompUter Machine Emulator) project. That project enables microcontroller-based emulation of many vintage computers and video game consoles, most of which are 8-bit models from the late ‘70s and early ‘80s. Supported systems include the ZX Spectrum, Commodore 64, Apple II, MSX, Amiga, Colecovision, Nintendo NES, Vectrex, Sega Game Gear, and many more. T-COMPUTER lets you emulate those systems on a dedicated device that is closer to the original hardware, so the experience is more authentic.

The design of the T-COMPUTER resembles a TRS-80 Model 100, because it has a built-in keyboard that sits in front of a small display. But while the Model 100 had an 8×40 character monochrome LCD screen, T-COMPUTER has a 320×240 pixel TFT LCD screen that can accurately handle the video output of the emulated systems. Video can also output through VGA if you want to connect T-COMPUTER to a monitor. It has a 42-key keyboard, which includes a D-pad and three action buttons. It has 16-bit stereo DAC (digital-to-analog converter) audio output, an SD card slot, the ability to act as a USB host for keyboards and mice, and a handful of GPIO pins.

The brain of the device is a Teensy 4.1 microcontroller development board, which is quite powerful. M.CU.M.E. works with other development boards (system support varies), but Harvengt chose the Teensy 4.1 for the T-COMPUTER because it works with every system. Power can come from a Micro USB power supply or from a 1000mAh LiPo battery. Most of the parts needed to build a T-COMPUTER are available off the shelf, but it does require a custom PCB and 3D-printed key caps for the tactile momentary push buttons.

Using T-COMPUTER isn’t quite the same as working with original hardware, but it is much closer than running an emulator on a modern computer and more affordable than vintage hardware.