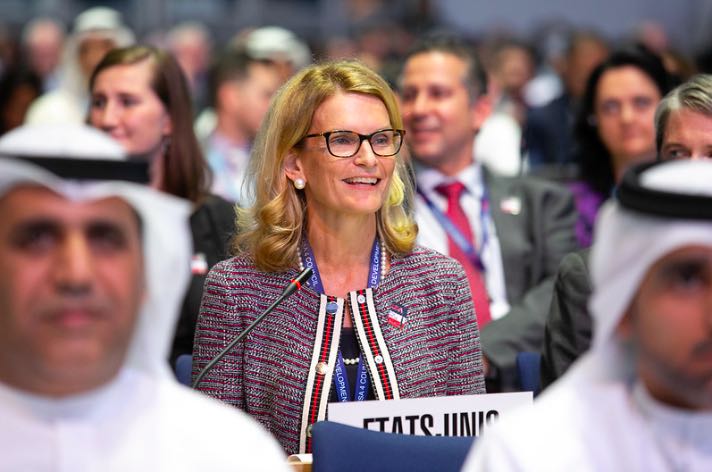 The International Telecommunications Union has elected Doreen Bogdan-Martin as secretary-general, the first woman to lead the organization in its 157-year history.

Bogdan-Martin currently serves as director of the ITU’s Telecommunication Development Bureau, a position she has held for the past three years and which she also was the first woman to hold.

Bogdan-Martin was nominated by the U.S. government for the role of secretary-general. The vote took place during the ITU’s ongoing Plenipotentiary Conference in Bucharest, Romania, on Thursday. Bogdan-Martin won the position with 139 votes out of 172 votes cast. ​​The other candidate for secretary-general was Rashid Ismailov of the Russian Federation, who received 25 votes.

In his letter of nominating her for secretary-general, U.S. Secretary of State Anthony Blinken wrote that Bogdan-Martin “has devoted her career to the ITU” for nearly 30 years. “She has prioritized bridging digital divides, improving accountability, and advancing global initiatives on school connectivity, innovation, digital transformation, and youth engagement,” he wrote. “She understands the urgency of universal connectivity, the importance of interoperable networks and services, and the need for efficient spectrum management and regulatory collaboration among governments.”

Bogdan-Martin served for ten years as chief of ITU’s Strategic Planning and Membership Department, where she acted as advisor to the ITU Secretary-General and was held responsibility for ITU’s corporate communications and corporate strategy, membership and external affairs, as well as managing the ITU-UNESCO Broadband Commission for Digital Development. She has also served as head of the ITU Telecommunication Development Bureau’s Regulatory and Market Environment Division, and of its Regulatory Reform Unit. Prior to joining ITU, Bogdan-Martin served as a telecommunication policy specialist at the National Telecommunications and Information Administration (NTIA) of the U.S. Department of Commerce.

“As chief architect of ITU’s development work in recent years, Bogdan-Martin has emphasized the need for digital transformation to achieve economic prosperity, job creation, skills development, gender equality, and socio-economic inclusion, as well as to build circular economies, reduce climate impact, and save lives,” ITU said in a statement.

Bogdan-Martin identified her three priorities for the ITU as working toward universal connectivity, including strengthening ITU’s advisory services for governments and its expertise; closer collaboration both among ITU’s three bureaus and among member states; and improving the performance and transparency of ITU as an institution.

“We convene the world’s regions and nations, along with many of its important information and communication technology (ICT) businesses, civil society, and academics, to work on development, technical standards, and radio spectrum. But to be relevant, ITU must evolve and sometimes break from old ways,” Bogdan-Martin wrote in a candidate questionnaire. “We must keep our eyes on the prize — breaking through the real problems — and this means being a listening and learning organization. We need to more vigorously embrace the very innovations we espouse. We must use data analytics better to give us a fact-based understanding of connectivity challenges. We must bring thought leadership and expertise in transformational technologies such as 5G, 6G, new space technologies, the Internet of things (IoT) and artificial intelligence (AI).”

Bogdan-Martin will officially step into the secretary-general role on January 1, 2023 and will serve a four-year term.