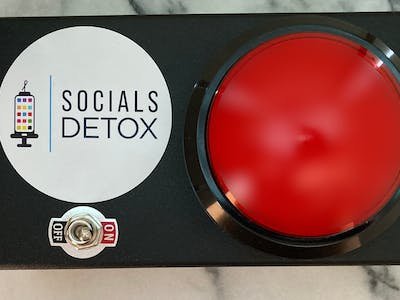 Debate about the effects of social media abounds, but many people know in their hearts that they spend too much time on social media and that it has a negative effect on their wellbeing. However, knowing that and being able to do something about it are two different things. The obvious solution is to delete your social media accounts, but that is hard to do if you rely on social media to stay in touch with family and friends. SocialsDetox is a service that can help and Gunter Froman’s Big Red Button activates it.

SocialsDetox can prevent social media usage in two ways. It can block access to social media sites and services entirely, or it can throttle their bandwidth in order to make them frustrating to use. Blocking access is straightforward — the websites and apps won’t work at all. The bandwidth throttling is more interesting, because it takes advantage of user psychology. The idea is that you’ll break your social media habit if it becomes more of a pain than its worth. In either case, the user can choose to activate SocialsDetox on-demand, according to a specific schedule, or all the time. This Big Red Button gives users an easy way to immediately activate the service any time they see fit.

This device works by communicating with the SocialsDetox API (Application Programming Interface) over the user’s network. The titular button is just a standard arcade button in a large package. It connects to a Wemos D1 Mini ESP8266 development board. A toggle switch “arms” the device so that the button is active. Those parts fit into a simple off-the-shelf project enclosure box with a couple of holes drilled in the top. This particular arcade button contains an LED that illuminates when the user turns on the device. Power comes from USB, so users can place the device anywhere near a computer or electrical outlet.

People can use the Big Red Button and the SocialsDetox service to limit their own access to social media, or they can use it for parental control. To keep people from simply deactivating SocialsMedia every time they want to browse Facebook, there are a few solutions. One could program the device so that it only activates the service for a set amount of time and cannot deactivate it. Or they can configure the SocialsMedia service so that it doesn’t allow deactivation at all for a certain period of time. A user could get around that by manually changing DNS settings, but it should be enough of a hassle that they won’t want to bother.