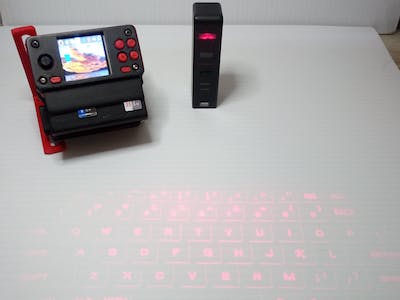 Most the cyberdecks we see range in size from something like a pocket PC to that of a luggable computer from the ‘80s. That makes sense, given the origin of the term “cyberdeck” and the inspiration for the community. But almost by accident, Omar ended up with a cyberdeck that fits on a keychain.

Omar started developing this device as a keychain SNES emulator. He wanted it to be as small as possible while still being practical for gaming. He achieved that and then added more and more features over time. Eventually he realized that he had an entire cyberdeck, even though that wasn’t his original intention. As it stands, this device contains everything we would expect to see on a cyberdeck.

It has a built-in screen and the ability to connect to external displays. It has physical buttons and a small joystick for navigation. It has a laser keyboard projector and can connect to WiFi through a USB dongle. It runs Kali, which is a Linux distro meant for penetration testing that has become a favorite in the cyberdeck community. The enclosure has space to store several Micro SD cards, so Omar can switch to other operating systems whenever he likes. Whenever he needs to do more intense work, Omar can VNC into the device from his smartphone or computer.

The centerpiece of the keychain cyberdeck is a Raspberry Pi Zero W. That has an onboard WiFi and Bluetooth adapter, so the USB WiFi dongle is secondary for pentesting. The screen is a small 1.8” LCD from Spotpear, which is also where Omar got the battery HAT. The components, including the laser keyboard projector, all fit into a tidy 3D-printed package that is small enough to slide into a pocket or strap to a belt. It does, of course, have a keychain ring too.

Omar can still use this device to play SNES games, but now he can do a lot more with it than that.