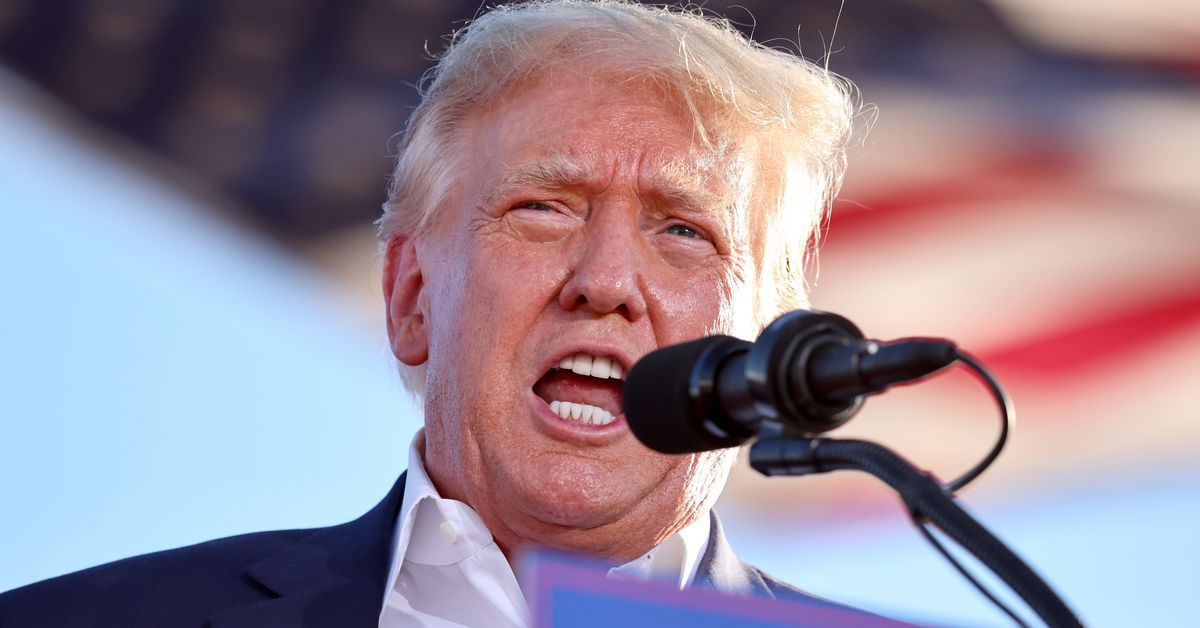 “In order to make America great and glorious again I am tonight announcing my candidacy for president of the United States,” Trump said, in an announcement at his Florida club Tuesday night. He officially filed paperwork for his campaign with the Federal Election Commission Tuesday as well.

The announcement sets up an enormously consequential campaign, one that may decide the future of the United States, its government, and its electoral system. Trump has never accepted his defeat by Joe Biden in 2020, and abused his powers to an unprecedented degree in his effort to overturn that election result and in stay in office. The effort failed, but he has made clear he regrets none of it.

President Biden has not yet said for certain whether he will run for reelection, but he has indicated he intends to do so. A Biden-Trump rematch, then, is quite possible, even likely.

But before the general election, Trump has to make it through the Republican primary process. There’s been much speculation about whether he’ll face a challenge, perhaps from Florida Gov. Ron DeSantis, who won in a landslide last week while many high-profile Trump-endorsed candidates went down to defeat. It is unclear whether DeSantis will take the risk of trying to defeat Trump, though. (Before the midterms, national polls showed that about 50 percent of GOP voters said they’d vote for Trump in a 2024 primary, which you can interpret either as a commanding lead over a split field or as a surprisingly weak showing for a recent president.)

If Trump makes it to the general election, the question becomes, can he win? With Biden’s and Trump’s approval ratings both hovering around 40 percent, that certainly isn’t out of the question. And despite Democrats’ better-than-expected performance in the midterms and against Trump-friendly candidates in swing states, they did likely lose the House popular vote to the GOP. More to the point, the general election is still two years away and much can happen before then.

Should Trump win, it would be a mistake to assume a second Trump term would roughly resemble the first. In that first term, Trump heavily relied for his appointments on the “Republican establishment,” including many officials who did try at least somewhat to rein in his most extreme or corrupt impulses. Since, he’s become more reliant on extreme advisers who have little interest in the norms of liberal democracy. That means a second-term Trump could well be far more successful at actually doing the corrupt things he always wanted to do.

Trump has been politically wounded and is facing many threats

Many in politics feared or hoped that Trump would exit politics for good following the January 6, 2021, attack on the US Capitol. And he could have been banned from holding federal office again had he been convicted in a Senate impeachment trial. But most Senate Republicans instead voted to acquit him in his February 2021 trial, meaning he is perfectly free to run again.

Since then, Trump has regained influence in the GOP, and his endorsements appeared to help swing many contested Republican primaries in 2022. Yet many of his most-hyped candidates subsequently went down to defeat last week. This has surfaced a GOP conversation that Trump previously tried to stave off with his stolen election lies — a conversation about whether Trump is, well, a loser.

Much of Trump’s appeal to Republicans in the 2016 primary was based on his claim that he’d be tough enough to win, unlike their previous party leaders. Then he actually did win the presidency, suggesting he had some electoral magic that kept propelling him to upset victories when the political establishment kept declaring him dead. Now, the magic may be gone, and Republicans frustrated at their party’s failure to retake the Senate are openly blaming Trump (while he, of course, points fingers elsewhere, including at Senate Minority Leader Mitch McConnell).

Trump’s critics in both parties had also hoped he’d be taken off the board by his escalating legal problems. Federal prosecutors are investigating whether his attempt to stay in power broke any laws, and a separate probe into whether he mishandled classified information after leaving office looks quite serious. Prosecutors in Georgia are also investigating his attempt to flip the state’s electoral votes in his favor, while a civil lawsuit from New York’s attorney general may present a serious threat to his business as well.

Yet none of this was sufficient to deter Trump from running again, and may have even heightened his desire to do so.

If he’s indicted while campaigning, he can claim the charges are political and whip his supporters into a frenzy, as he did on January 6. Then, if he wins, he’d likely avoid federal prosecution while he’s in office (due to a longstanding Justice Department opinion that the sitting president should not be charged) and would gain the power to pardon federal crimes (even, perhaps, his own).

It might be tempting to expect Trump’s second term would resemble his first — one in which he was frequently erratic and chaotic but hemmed in by the GOP establishment and unable to follow through on many of his most extreme or dictatorial impulses. But that won’t necessarily be the case.

For example, during Trump’s first term he wanted the Justice Department to prosecute his political opponents, but the department refused. He wanted to withdraw from NATO but didn’t follow through on it. And as far as Trump did go in trying to overturn Biden’s win, he considered going even further — discussing, for instance, imposing martial law and commandeering the DOJ in his election-stealing effort — but was convinced to back down.

Now Trump would likely return to office with a different mindset and different incentives. He would no longer need to constrain himself with reelection in mind. And after January 6, he’s embittered against traditional Republican establishment forces he believes abandoned him.

He’d also return to power with a different party. Since Trump’s initial rise to power, the GOP has gradually been remaking itself in his image. Many of his most outspoken critics have since retired, lost primary challenges, or even become his staunch supporters. Most Republicans who were appalled at Trump’s disrespect for the norms of liberal democracy are either no longer in the party or no longer so outspoken.

And he could staff up a very different government. In contrast to the post-2016 transition, when Trump really had no idea what he was doing and had to rely on many traditional Republican elites to staff his administration, his team has gotten more obsessed with identifying reliable loyalists who would work to carry out his agenda and defend him personally next time. People close to Trump are reportedly exploring proposals to fire tens of thousands of civil servants in the federal government, replacing them with loyalists.

So Trump and his team may well become more skilled at identifying, appointing, and empowering officials who would act in Trump’s personal interests, even if it means defying law or tradition. Indeed, his recent legal peril will make that of paramount personal importance to him.

There’s every reason, then, to expect a second Trump term would be far more tumultuous than the first — and that it could lead the country, and our democracy, to some totally unprecedented places. The stakes are high, and the battle for America’s future has begun.