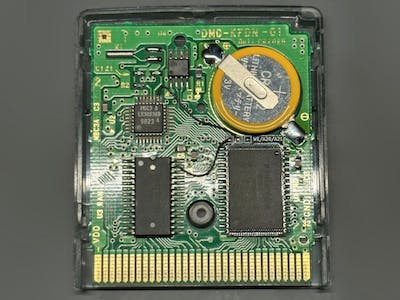 Retro-gaming enthusiast Timothy Friez is upcycling old Nintendo Game Boy and Game Boy Color cartridges into flash carts, offering 2MB of storage and a battery-backed real-time clock — and has released the PCB designs for you to make your conversions, too.

“This cartridge was created by swapping out the mask ROM included with the OEM [Original Equipment Manufacturer] PCB and replacing it with a flash adapter and AM29F016 flash memory chip,” Friez explains of an off-the-shelf pre-assembled model he has built for sale — while making the underlying adapter board design available for anyone to use.

The flash cartridge Friez has produced offers 2MB of flash storage and 32kB of static RAM (SRAM) along with a real-time clock and battery back-up — used by some Game Boy and Game Boy Color games to tie in-game time to real-world time. Rather than building the cartridges from scratch, though, Friez is upcycling original Nintendo PCBs by swapping the mask ROM for the flash memory chip, soldering a new CR2032 battery into place, testing the crystal and remaining chips, and placing the result into a replica cartridge housing.

“Each flash cartridge was fully tested using a GBxCart RW v1.4 Pro from InsideGadgets and a working GBC [Game Boy Color] console,” Friez writes. “Also has been tested with a Benn Venn Joey Jr. V2 and Joey Jr. V2++ readers. Flash carts may be compatible with other cartridge reader/writer systems, but has not been fully tested.”

Friez is selling fully-assembled cartridges through his Timville Tindie store at $36, while a three-pack of flash adapters for manual conversion can be purchased for just $2.50. Alternatively, Friez has released KiCad project files and Gerbers for PLCC32, TSOP32, and TSOP40 flash chips on GitHub under the permissive Apache 2.0 license.