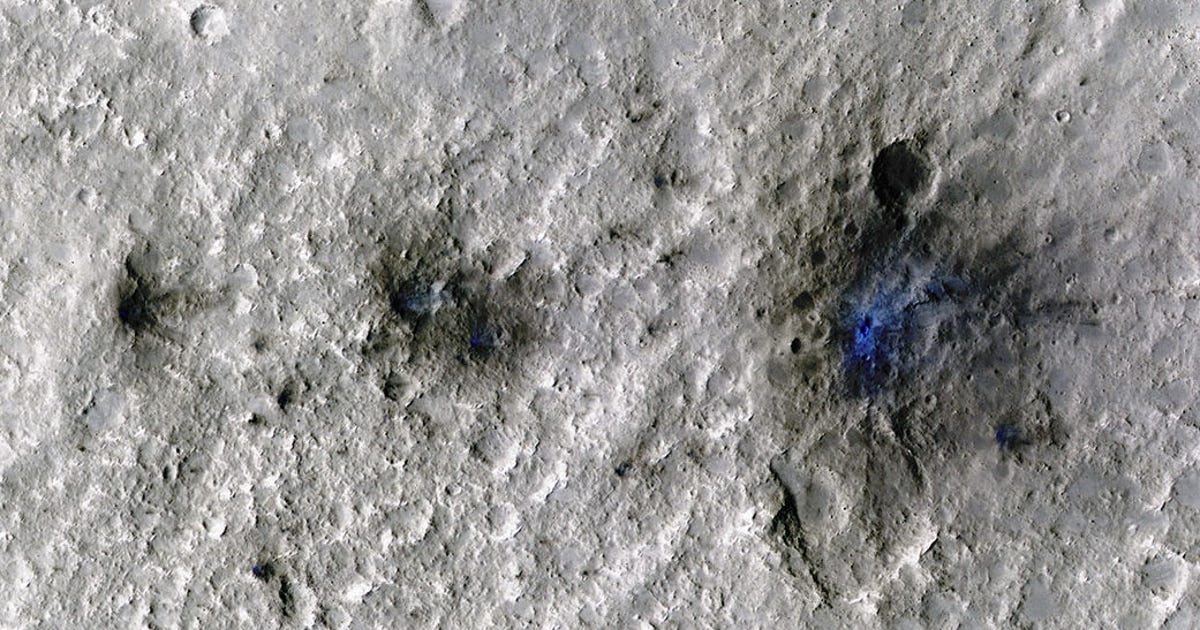 This story is part of Welcome to Mars, our series exploring the red planet.

What does it sound like when a space rock strikes the surface of Mars? If you’re NASA’s InSight lander, the answer is “bloop.” The lander’s earthquake-hunting seismometer picked up on a series of meteoroids that impacted Mars in 2020 and 2021. Talk about good vibrations.

The impacts and InSight’s detections are the subject of a paper published in the journal Nature Geoscience on Monday. “Not only do these represent the first impacts detected by the spacecraft’s seismometer since InSight touched down on the red planet in 2018, it also marks the first time seismic and acoustic waves from an impact have been detected on Mars,” NASA said in a statement.

The first (and most dramatic) detection scientists noticed was from Sept. 5, 2021. InSight picked up on seismic waves from a rock that exploded into at least three sections, each one leaving a mark in the form of a crater. NASA’s Mars Reconnaissance Orbiter (MRO) checked out the impact site and spotted the craters, confirming the source of the waves “heard” by the lander’s seismometer.

NASA-JPL shared an exuberant video of what InSight heard in September 2021, tracing the moments when the meteroid entered the atmosphere, exploded into pieces and hit the ground. “This meteoroid impact sounds like a ‘bloop’ due to a peculiar atmospheric effect heard when bass sounds arrive before high-pitched sounds,” JPL said.

A look back through InSight’s data turned up three more meteoroid impact detections. Mars has a reputation for getting peppered with space rocks, so scientists wondered why InSight only noticed a handful. “InSight’s team suspects that other impacts may have been obscured by noise from wind or by seasonal changes in the atmosphere,” NASA said. The hunt for impact detections isn’t over. Researchers will continue digging through the lander’s data for more.


InSight’s insights into impacts are valuable for sorting out the history of the Martian surface. “Impacts are the clocks of the solar system,” said the study’s lead author Raphael Garcia. “We need to know the impact rate today to estimate the age of different surfaces.”

InSight is in the final days of its mission. The lander’s solar panels are coated in dust and power is dwindling. It’s still listening for Marsquakes, but it’s expected to shut down before January 2023. It’s been a memorable adventure, giving scientists a new understanding of the red planet’s interior and, as in the case of the meteoroid impacts, its surface activities as well.