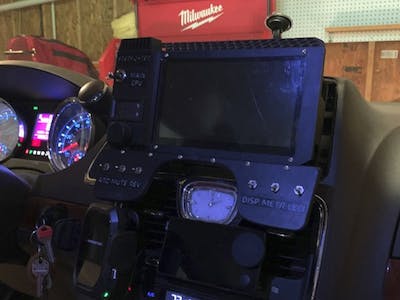 Pseudonymous maker “thesebelik” has put together a cyberdeck with a difference: the Starfighter is designed for installation into a car, as a replacement for a stock “infotainment” system.

“My car is very special to me. Her name is Ganymede and she’s the spitting image of whatever comes to your head when you think of a ‘mom van,'” thesebelik explains. “She takes me everywhere I need to go, lets me go on road trips across the country, and was even my source of income for a time when I used to be a pizza delivery driver. Over the years I have quite enjoyed the many hours spent in the driver’s seat, save for one aspect: the radio sucks.”

The Starfighter is a sci-fi-themed upgrade for a “mom van” infotainment system. (📷: thesebelik)

While there’s no shortage of aftermarket radio systems for vehicles, thesebelik decided to go in a different direction to build the Starfighter custom car computer cyberdeck. “Designed to be so much more than your suburban ‘infotainment’ system, it’s got an Atomic Pi x86 single board computer for its primary cortex, along with an Ardino Nano to handle some other core functions with its zippy startup time. It includes a bunch of other modules and subsystems too such as GPS, 5G internet, CAN bus decoding, RGB LEDS, and more that help it reach its goal of being the coolest and most useful carputer anyone has ever seen on this road trip through dystopia!”

The exterior of the Starfighter is a custom-built 3D-printed chassis, and it’s this that makes it clear where the build gets its name. Designed to look like something you’d see in the cockpit of a space-faring vessel, rather than a “mom van,” the build includes tactile toggle switches, two three-digit seven-segment displays, a rotary encoder, and a primary touchscreen interface.

The Atomic Pi x86 provides plenty of power, but getting it working proved a pain. (📷: thesebelik)

Behind the screen are the electronics, including the Atomic Pi single-board computer. “Legend has it that the Atomic Pi is industrial surplus: Some big tech company wanted to put an Amazon Alexa on wheels so it could follow you around your house, and then for some reason nobody wanted to buy it,” thesebelik explains. “The Atomic Pi definitely has its quirks, such as only accepting power input through the GPIO pins, but by far its biggest flaw is lack of support.”

“You can find some person on the internet telling you how to do almost any hardware or software tomfoolery imaginable with a regular Raspberry Pi, and that’s part of what makes it so great. Its intricacies are extremely well documented and it has a huge global community of helpful people surrounding it. Whatever you’re trying to do with your Raspberry Pi, there is somebody out there who has done it before or at least knows how to. The Atomic Pi, on the other hand, has none of that. Team IoT provides some documentation, and there’s a subreddit that’s pretty helpful, but I ran into significant difficulty trying to learn how to configure software for it.”

The build’s fascia is designed specifically to fit the dashboard in “Ganymede.” (📷: thesebelik)

While some functionality, such as navigation via a dedicated Global Navigation Satellite System (GNSS) receiver and a tie-in to the car’s integrated backup camera, has yet to be implemented, the Starfighter already offers more features than the stock system — and work continues on adding still more over time.

Full details are available on thesebelik’s project page, along with downloadable STL files for the 3D-printed parts.