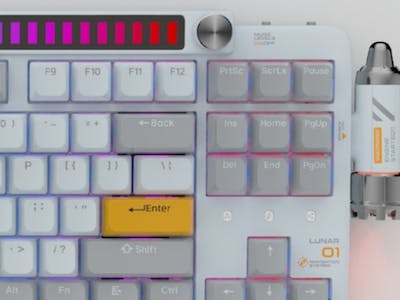 If you keep up with my articles here on Hackster, then you know that I’m big on mechanical keyboards (and thank you for reading!). I firmly believe that they improve typing speed and accuracy, while also reducing repetitive stress injuries. But if that isn’t enough to convince you, then maybe this lunarious* new keyboard from KEYSME will do the job.

The KEYSME Lunar 01 customizable mechanical keyboard is on Kickstarter right now and the campaign will continue to run until October 13th. It had a modest $5,096 funding goal, which means that this campaign, like most these days, was more about garnering publicity than enabling production. But 125 backers so far have chipped in and raised $22,701 for the campaign.

Interestingly, the Kickstarter biography says “since 2004, KEYSME has been at the forefront of designing state-of-the-art products for the world’s leading brands.” But I can’t find any evidence of the company’s existence prior to this year. Founder Ranto Liu was previously the CEO of a company called Buysir that was also involved with keyboards, so maybe KEYSME is a rebranding.

Either way, the Lunar 01 looks cool and has the specs that we expect from a good mechanical keyboard. It can connect to computers via USB, 2.4GHz wireless, or Bluetooth. The 87% layout has hot-swappable key switch sockets compatible Cherry MX and Gateron switches. All keys have RGB backlighting LEDs reverse-mounted on the PCB. A variety of key caps are available, including dye-sublimation, double-shot, and transparent keys in different profiles. A multi-function rotary encoder knob and RGB LED strip at the top are programmable for different functions, and users can remove the LED strip to reveal a multi-purpose LEGO-compatible slot.

The real draw here is, of course, the space theme. If you aren’t into space stuff, there are a thousand other mechanical keyboard options. But if you love space, then this will stimulate your brain in the right places. The key caps reflect that theme, but there is more to this keyboard. The standout features are the two detachable fidget spinners that resemble rocket engines. I’m not quite sure if those are cool or just a silly gimmick, but that’s for you to decide.

If you want the KEYSME Lunar 01, you have until October 13th to back the Kickstarter campaign. A barebones keyboard will cost you HK$860 (about $110 USD), while a full dye-sublimation keyboard at the Kickstarter Special price will set you back HK$1,410 (about $180 USD). Backers should receive their keyboards in December of this year.

*Please tell me that someone got my Zenon: Girl of the 21st Century reference.