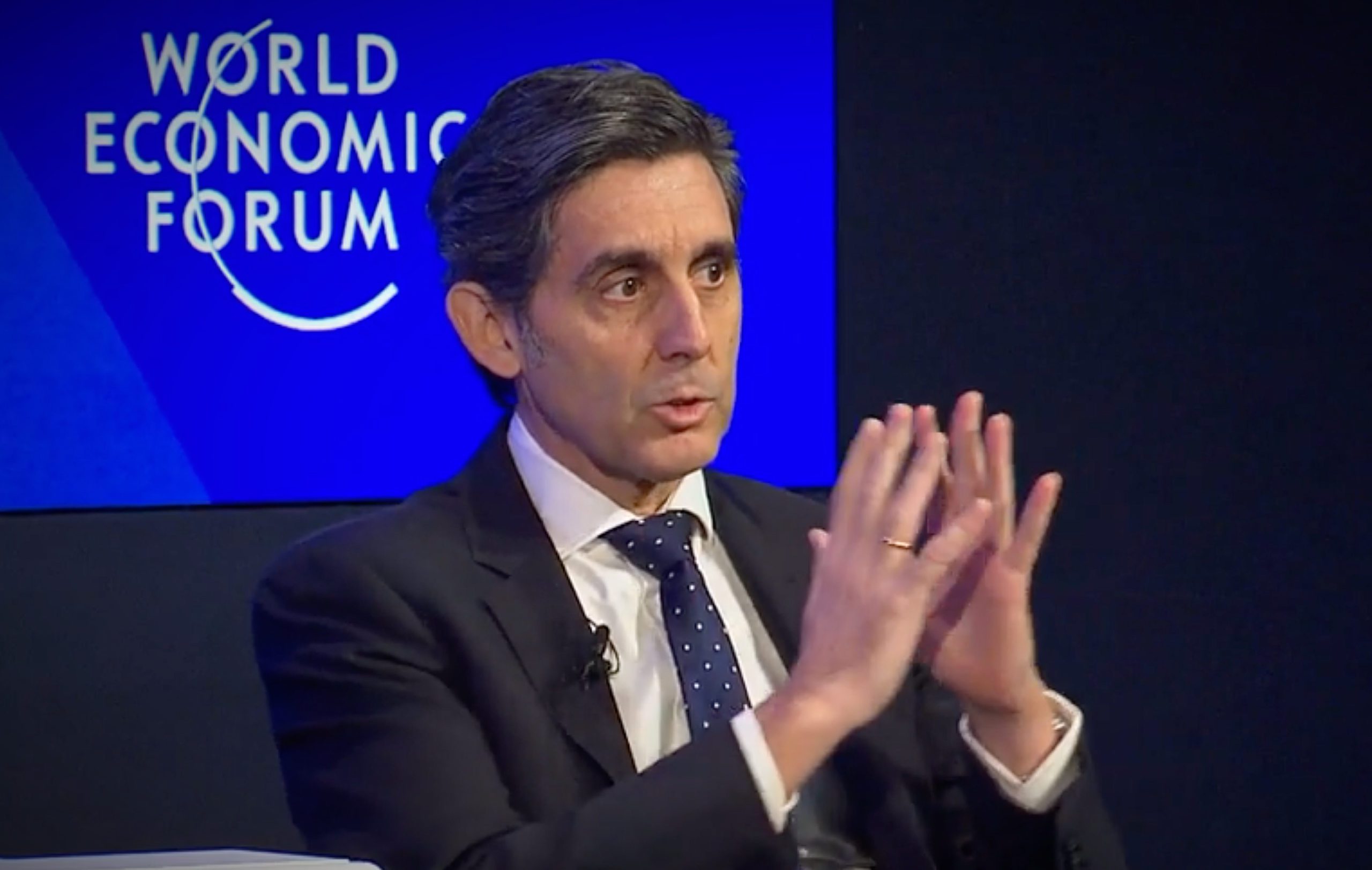 A quick excerpt from a panel session at the World Economic Forum in Davos this week, courtesy of José María Álvarez-Pallete, chairman and chief executive at Telefónica, who directly and powerfully addressed the elephant in the elite Alpine conference rooms: that unfettered digital change is hastening political, economic, social, and environmental unrest. Quite so, acknowledged Álvarez-Palette, unprompted; but technology is undeniable, and the only means in the end to tackle inequality, as well – to “improve the state of the world”, as per the Davos agenda.

Appearing Wednesday (January 18) on a panel about the ‘future of jobs’ – flanked by speakers from the International Labour Organization and International Trade Centre, plus US Secretary of Labor Marty Walsh – Álvarez-Pallete said that digital change, massively accelerated, will get out of control if it goes undirected and unmanaged. He suggested the focus on the economic fallout from the global pandemic and war in Ukraine, plus other issues, misses the point: that global inequality, already rife, is compounded by technology and leading to social unrest.

Responding to a question about the value of public-private partnerships (PPPs) for the future of work – to train and retrain workers in the digital age – Álvarez-Pallete zoomed out, to argue that the big question for society is how to manage its digital transition. This change is already reflected in the traffic across Telefónica’s network, he said. Technology is at the heart of this disruption, in the end – as an agent of change, however change is delivered. “Technology is the root cause of the problem, but [also] the root cause of the solution,” he said.

PPP collaboration is “essential”, he said repeatedly, as an urgent framework for government and industry to manage the digital divide as it threatens to cleave society open, and make the irresistible tech-rush a force for good – including for environmental sustainability. But his explanation of a schism in the ‘metaverse’ was important to hear, and important for the tech sector to tell, and is therefore worth printing in full – minus the 3PPP references in the transcript below to focus on the message about tech as a pivot for the future of work, inequality, society, everything.

Here (below) is Álvarez-Pallete’s response, in full, to an initial question about the future of work at the WEF panel. A recording of the event is available here, alongside other WEF keynotes and panels; the rest of the session contains good commentary from all panellists, including insight from Álvarez-Pallete about Telefónica’s Campus 42 education concept.

“Technology is impacting everything. We are very focused on… the pandemic, or the war in Ukraine, or inflation. But the reality… is [there is] massive transformational change. Forty percent of the traffic that flows through our network today is not human anymore; those are machines talking to each other. During the pandemic, video conferencing from Friday to Monday was multiplied by a factor of seven. Things that were supposed to happen five years from now happen[ed] in the middle of the pandemic. Every week of the pandemic was equivalent to a year of digital adoption.

“So… [technology] is changing everything. [It] is already here, and we are going to have as much technology as we want… [But] technology is creating inequality. The major challenge we face as a society, in my opinion, is inequality, Because this wave of technology is going to destroy millions of jobs. It is going to create millions of jobs [as well]. But if we don’t handle that transition in the right manner, we will [face] social unrest – [which] is the most dangerous thing a society can have. Not just in developing countries [but] everywhere.

“So we need to make sure that whoever has a job can keep a job, and whoever doesn’t… [can] find one. And we need to manage this transition. The traditional education system is not going to be able to cope… because it is based on techniques that are not going to… cope with the… pressure the system is going to have. We need new ways-of-doing… In the case of Telefonica, we used to be [part of] a traditional telecoms sector. When you deploy fiber and 5G, [you are] no longer [running] a traditional telecoms network. You [are running] a massively decentralized supercomputer. The skills needed to do one thing are different to the skills needed to do another thing.

“So what we have is the largest reskilling programme in Europe. We are reskilling, as we speak, more than 16,000 people – using technology. What we are proposing is to apply these new technologies to cope with the big problem – the societal problem… There are 10 million people unemployed [in Europe] and five million jobs that are vacant – because people don’t have the skills. In the next five years in Europe, 20 million jobs will be created in digital transition, [and] also in artificial intelligence [and] the climate transition.

“And technology itself doesn’t have values. [The result] depends on how we use technology, and which values we want that technology to be frameworked in. I think inequality is the problem, and the one we should tackle. And reskilling and technology [are] part of the solution.”