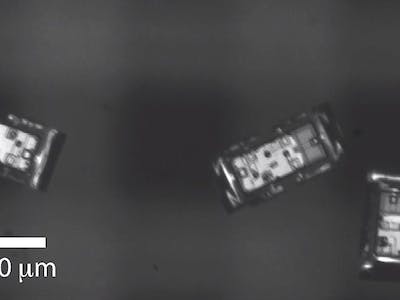 Researchers from Cornell University have created fully-autonomous microrobots powered by the sun, each one smaller than the head of an ant — yet capable of moving around without external control, courtesy of a tiny CMOS clock circuit.

“What this lets you imagine is really complex, highly functional microscopic robots that have a high degree of programmability, integrated with not only actuators, but also sensors,” explains lead author Michael Reynolds of implications of the team’s work. “We’re excited about the applications in medicine – something that could move around in tissue and identify good cells and kill bad cells – and in environmental remediation, like if you had a robot that knew how to break down pollutants or sense a dangerous chemical and get rid of it.”

Microrobots, which can measure as little as 100 micrometers across, are nothing new — but previous efforts have typically come with literal “strings” attached, in the form of wired connections to external power sources. “Before, we literally had to manipulate these ‘strings’ in order to get any kind of response from the robot,” explains Itai Cohen, professor of physics at Cornell University and co-senior author of the paper. “But now that we have these brains on board, it’s like taking the strings off the marionette. It’s like when Pinocchio gains consciousness.”

That “brain” is an ultra-compact circuit built using a complementary metal-oxide semiconductor (CMOS) process, as with much larger chips, which combines around a thousand transistors with diodes, resistors, and capacitors to form a clock circuit capable of driving the platinum-based actuators that make up the robots’ legs. Photovoltaic cells on the top of the robot drive both the clock and the actuators, allowing the robot to “walk” without external control or any power source beyond the sun.

The tiny robots are smaller than an ant’s head, yet carry everything they need for autonomous operation. (📷: Reynolds et al)

“Eventually, the ability to communicate a command will allow us to give the robot instructions, and the internal brain will figure out how to carry them out,” Cohen claims. “Then we’re having a conversation with the robot. The robot might tell us something about its environment, and then we might react by telling it, ‘OK, go over there and try to suss out what’s happening.'”

The simplified fabrication process for the brain can, the team claims, be used as a platform for building other payloads for future microrobots — including chemical detectors and “eyes,” which use photovoltaics to navigate by detecting changes in ambient lighting.

The team’s work has been published in the journal Science Robotics under open-access terms.

ios – TextField is not moved back down with keyboard avoidance on

With security, is a good offense good enough?