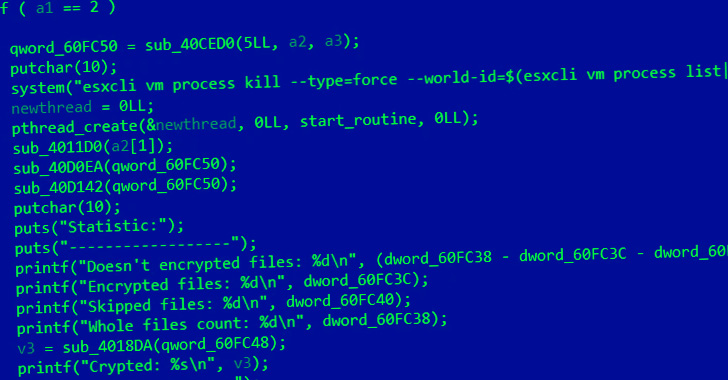 Cybersecurity firm Sygnia attributed the attacks to a threat actor it tracks under the name Emperor Dragonfly, which is also known as Bronze Starlight (Secureworks) and DEV-0401 (Microsoft).

“Emperor Dragonfly deployed open source tools that were written by Chinese developers for Chinese users,” the company said in a report shared with The Hacker News. “This reinforces claims that the ‘Emperor Dragonfly’ ransomware operators are based in China.”

The use of Cheerscrypt is the latest addition to a long list of ransomware families previously deployed by the group in little over a year, including LockFile, Atom Silo, Rook, Night Sky, Pandora, and LockBit 2.0.

Secureworks, in its profile of the group, noted “it is plausible that Bronze Starlight deploys ransomware as a smokescreen rather than for financial gain, with the underlying motivation of stealing intellectual property theft or conducting espionage.”

Cheerscrypt was first documented by Trend Micro in May 2022, calling out its abilities to target VMware ESXi servers as part of a tried-and-tested tactic called double extortion to coerce its victims into paying the ransom or risk facing data exposure.

It has also claimed to be pro-Ukrainian, displaying a “Glory to Ukraine!” message on their dark web data leak site.

Interestingly, the ransomware shares overlaps with the Linux version of the Babuk ransomware, which had its source code leaked in September 2021 and also forms the basis of Emperor Dragonfly’s Rook, Night Sky, and Pandora families.

The threat actor’s modus operandi further stands out for its handling of all stages of the ransomware attack lifecycle, right from initial access to ransomware deployment, without relying on affiliates and access brokers. Microsoft described DEV-0401 as a “lone wolf” actor.

Infection chains observed to date have made use of the critical Log4Shell vulnerability in Apache Log4j library to compromise VMware Horizon servers to drop a PowerShell payload capable of delivering an encrypted Cobalt Strike beacon.

Sygnia said that it also discovered three additional Go-based tools deployed in tandem to the beacon: a keylogger that exports the recorded keystrokes to Alibaba Cloud, an internet proxy utility called iox, and a tunneling software known as NPS.