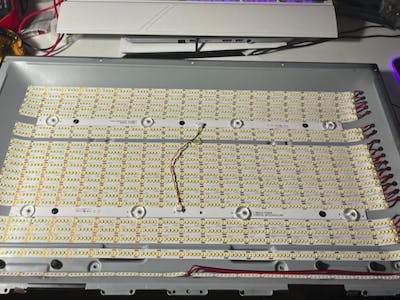 Tired of not being able to see the screen in direct sunlight, maker Josh Starnes set about upgrading an old LCD TV’s backlight — adding as many LED lighting strips as would physically fit to provide enough brightness to outshine the sun itself.

TVs are a wonderful display device for the living room, den, or even office. Put them opposite a window or try to use them outside, though, and the all-too-often weak backlight can’t compete with the sun — resulting in a weak picture at best and an entirely blank display at worst. When you’re looking to take your TV tailgating, that’s unacceptable — which is where Starnes’ mod comes in.

Taking the TV apart, Starnes removed the stock backlight and replace it with as many 6000k CRI 90 sunlight-style LED lighting strips as the case would accept. Once finished, Starnes added a power supply capable of driving the now-240W backlighting system — creating a display that could pump out lumens like never before.

“Today I brought the TV outside to test if the mod was even worth it in daylight,” Starnes writes of his testing. “Surprised to see that it goes from not being visible at all in the daylight to looking just like you expect it would indoors. This is in direct sunlight!”

Starnes has not published a guide to performing the modification yourself, but additional information can be be found on his Hackaday.io project page.