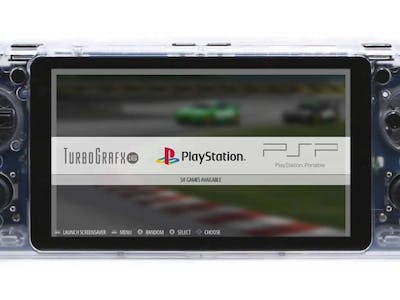 Single-board computer specialist Hardkernel has launched its latest device — this time packing hardware from its ODROID-N2+ SBC into a handheld console built with emulation and gaming in mind: the ODROID-GO ULTRA.

“ODROID-GO ULTRA [OGU] is a new gaming focused development platform,” Hardkernel explains of its latest launch. “Its overall system was designed based on our powerful ODROID-N2+. OGU’s exterior and LCD size are the same as OGS [ODROID-GO SUPER], but the internal core components have been completely redesigned. The OGU PCB shape is identical to the OGS, but it has a totally different circuit design and requires a heatsink to cool down its more powerful CPU.”

The latest entry in the ODROID family is an ODROID-N2+ tweaked for gaming on the go: The ODROID-GO Ultra. (📷: Hardkernel)

That more powerful CPU is an Amlogic S922X system-on-chip with four high-performance Arm Cortex-A73 cores running at up to 2.2GHz and two low-power Cortex-A53 cores running at 2GHz, an Arm Mali-G52 graphics processor running at up to 846MHz, and 2GB of LPDDR4 memory. The SBC also includes 2GB of LPDDR4 memory, 16GB of eMMC storage with microSD expansion, and a USB 2.0 Type-C On-The-Go (OTG) for charging or external devices.

The gadget includes a range of inputs, plus a USB Type-C OTG port for external hardware. (📷: Hardkernel)

On the software front, Hardkernel is supplying the ODROID-GO ULTRA with a customized operating system based on Ubuntu 20.04.4 with Linux 4.9.277, plus a retro gaming emulation package comprised of a tweaked EmulationStation front-end interface and Libretro back-end to a range of emulators.

The handheld has launched in two colors: dim gray, a solid-plastic chassis that hides the internals away; and clear white, a transparent housing that puts the internals on display. Both are available on the Hardkernel store now, priced at $111 before shipping; those buying in bulk can receive a three per cent discount on 30 units or more.