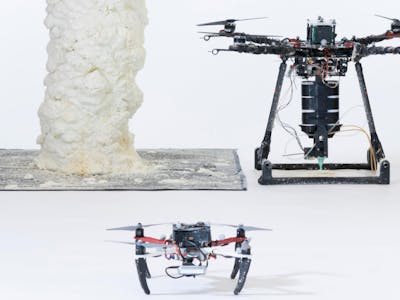 The term “mud dauber” refers to several species of wasps with females that use mud to build intricate nests several times their own size. Even though they’re very light and can’t carry much weight, they can build their nests quickly by moving a small amount of material with each pass. And because they can fly, they can build their nests in otherwise inaccessible locations (often to the annoyance of home owners and mechanics). Inspired by wasps like these, an international research team created a swarm of drones that can work in unison to build structures.

3D-printed structures are old news at this point, but this research stands out because of the use of drones. Because the structures we build tend to be quite large, 3D printers capable of producing entire buildings are huge — usually on the scale of construction machinery like cranes. They also have to move massive amounts of material, because even small buildings can weight several tons. For those reasons, drones would seem ill-suited to 3D-printing structures. But by coordinating the work of several drones over a long enough period of time, it is possible to print large structures. Like mud daubers, those drones can reach locations inaccessible to conventional construction equipment and that presents a use case to drive this development.

The engineering team developed two classes of drone for this work: the BuilDrone and the ScanDrone. The BuilDrones carry and extrude material, like expandable polyurethane or special concrete mixtures, according to flightpaths generated by a computer. The ScanDrones use 3D-scanners to monitor the construction process, which creates a closed-feedback loop to correct for errors. That is important, since the BuilDrones are subject to the inaccuracy inherent to outdoors flight — a problem that compounds as the BuilDrones pick up new material and work in concert. Without the closed-feedback provided by the ScanDrones, wind gusts and accumulated positioning errors would cause the structures to grow increasingly inaccurate as the project progressed.

The demonstrated structures don’t look very impressive. They’re lumpy and have obvious layer lines. But it is important to keep scale in mind, because that surface finish is reasonable when a structure is the size of a building. With drones to handle the bulk of the construction, human laborers could easily smooth the outer surfaces when necessary. The expanding foam creates an even worse surface finish, but that’s balanced by the light weight. The engineers claim that they can maintain millimeter accuracy, which would result in respectable surface finishes with the right materials.