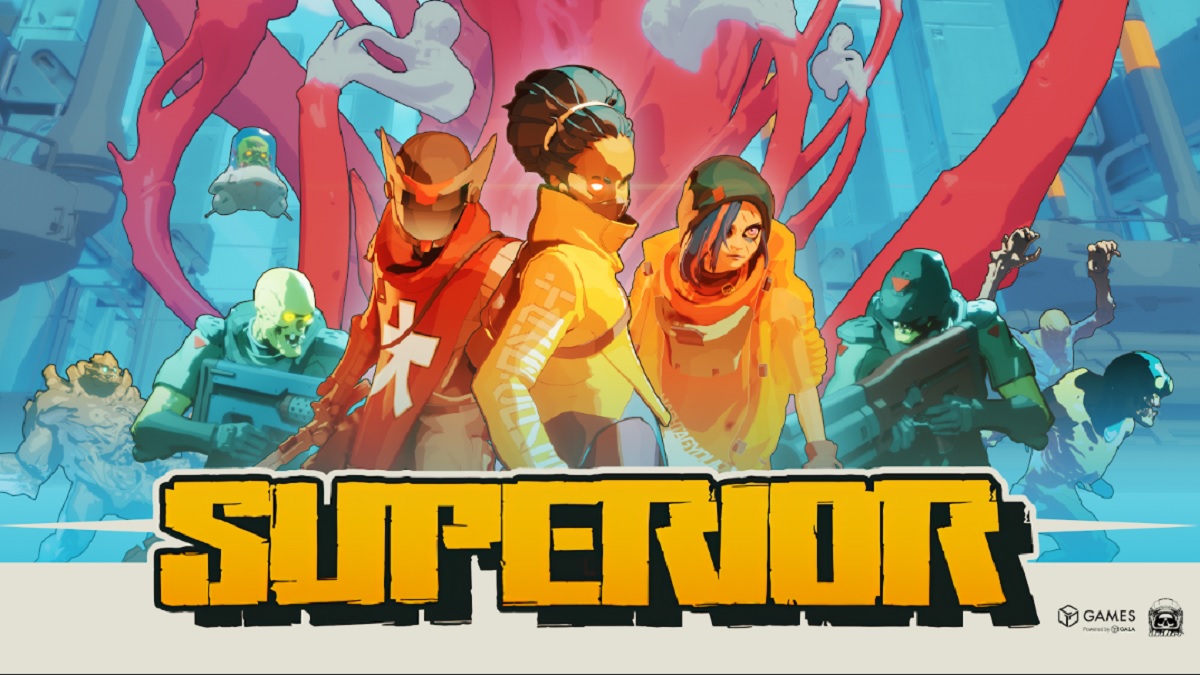 Drifter is launching its Superior co-op third-person shooter game on Steam today. You can also play a blockchain version on Gala Games.

It’s a title where you take on superheroes who have been corrupted and turned into evil abominations. And it represents a big milestone in the journey of Drifter, which has pivoted in different directions in the name of survival as an indie game maker. The game itself is quite interesting, but so is Drifter’s choices in deciding to make two different versions of the game.

The game from Jackson, Wyoming, and Seattle-based Drifter is available on Steam in early access for $25, though it will sell for a 15% discount in its launch week. The game also has a blockchain version available through the publisher Gala Games.

Ray Davis, CEO of Drifter, and cofounder Brian Murphy said in an interview with GamesBeat that the company originally focused on virtual reality games like Robo Recall: Unplugged, Lies Beneath and VR shooter Gunheart. Davis was proud of what the company accomplished in VR, but it didn’t take off as expected. The company decided to shift back to making PC games like Superior.

“We actually launched our last VR title published by Oculus. That was Lies Beneath. And we had a ton of fun with that game. And you know, we’re still big fans of virtual reality. But as I’m sure you’re aware, the market was sort of in a weird state,” Davis said. “So we decided to push pause on this and go back to our classic gaming roots.”

It has taken about 2.5 years to get to this point, and that’s a long time for a startup.

“Co-op PC shooters — that’s in our DNA, you know,” Davis said. “And we looked at what’s happened with the arc of superheroes becoming mainstream popular. Marvel has been so successful. This is the backdrop that is perfect for the kind of games that we love to play, and more importantly, love to make. The superheroes are evil and now you’re hunting them down and stealing the superpower.”

The company had been working on a rogue-like game at the time, similar to Hades, which was so inspirational.

“Hades was like such a masterpiece,” Murphy said. “And we wanted to see if we could take some of the mechanics that they brought out in such a polished way and apply a third-person shooter sensibility to it. We were also really excited about returning to co-op. At that moment, we hadn’t seen any rogue-like co-ops, which ends up being a really interesting challenge in and of itself.”

I asked why the team didn’t just make a game about hunting supervillains.

“We’ve seen a lot of superhero stories that follow that exact storyline. And we were just interested in creating a world where the superheroes got everything they wanted. And then that power begins to twist them into monsters,” Murphy said. “And I think we just want to do something different. We love the genre, but we didn’t want to go and try to just perfectly emulate what other people are doing in the genre. We want to do something that was kind of uniquely ours.”

In that respect, BioShock was also an inspiration, where humans get godlike powers and don’t really do anything to save humanity. Another inspiration was Brandon Sanderson’s Steelheart novels.

And while that sounds dystopian, Davis said the game also has a silly sense of humor.

The gameplay of Superior

You start each mission unpowered and outgunned as you hunt down superheroes, steal their powers, and save the world. As you succeed in your mission, characters are upgraded with a branching skill tree, granting more powers and abilities to take on more heinous heroes.

Armed with a powerful arsenal and your teammates, you advance through a sprawling hyper-stylized superhero universe with multiple locations and dynamically configured missions. With hundreds of unique superpowers, weapons, items, and abilities to upgrade and choose, Superior lets you craft your own Hero Hunter.

Superior has a bunch of features such as customizable characters, upgradeable through play. It has boosting abilities, where every session players earn XP and unlock new skills and overdrive abilities, like satellite death beams or stealth mode.

You start your run with lower-level weapons like pistols and a baseball bat. As you run-and-gun, you pick up more powerful equipment, such as grenade launchers, railguns and plasma blasters. There are dozens of superpowers you can unlock such as launching fireballs or burning enemies as you leap into the air on jets of flame. You can create ice sheets for speeding up allies and causing freeze damage through ice spikes.

You can use force fields that deal damage, create explosions and knock enemies back. You can use Xeno, an alien goo that swarms to your aid in combat and allows you to shape-shift at will. You can use Volt to control electricity and transform your character into a being of pure energy.

In the full game, you square off against six unique ex-superhero bosses and an army of their henchmen. Each character unleashes their own brand of super-powered chaos, from force fields to fireballs.

Players encounter new challenges and monstrosities in their mission as they fight through hours of dynamically changing environments. Mission objectives, routes, and adversaries are also dynamically reconfigured, with new content revealed as players progress through the challenges.

While still an indie, the company is back on a path to where it came from, as it has developers who came from working on triple-A games such as Gears of War, Doom, Halo and Apex Legends.

The developers made some tough choices in the development of the new game. Davis said the studio decided not to take venture capital, even during the heyday of the last few years when VC money was finally available in droves to finance games. Then the pandemic struck.

“This is our pandemic game for sure,” Murphy said. “We started it right when the pandemic started. It has been our life raft.”

Instead of turning to VCs, Davis said the company decided to embrace blockchain technology. Gala Games offered to finance the studio and the game in a publishing deal. But that meant that Drifter had to make a version of the game for blockchain tech, as Gala Games is a publisher of non-fungible token (NFT) titles. Gala Games, started by CEO and Zynga cofounder Eric Schiermeyer, has been enormously successful with token sales and it has been financing a lot of projects.

“A lot of it was certainly complicated by the pandemic. But I think fundamentally when we started Drifter almost seven years ago, we had a shared passion of doing game development plus emerging technologies. And looking at the time virtual reality, we asked, ‘What can we do with this?’”

When Web3 came along, the team had a healthy dose of skepticism that persists even now. It was a controversial decision to use Web3, both internally and externally.

“I see so many parallels to when we were starting with VR,” Davis said.

But Davis believes the fundamental technologies enable players to own their games and sell them if they wish.

“We treat them as two completely different products, essentially,” Davis said. “There’s the Web3 version through the Gala platform. And then what we’re focused on primarily right now is the Steam release and, ideally, we’ll bring it to other platforms very shortly as well.”

The Steam vision isn’t going to have blockchain, which Steam would block anyway.

“We’re giving players a choice,” Murphy said. “We’re not trying to like cram one business model down players’ throats. We just want to make awesome games that resonate with people.”

The Drifter game debuting on Steam is a normal Web2 game, and the team wanted to make sure that people could play the game using normal payment systems instead of cryptocurrency and still be able to play the game without having to buy blockchain assets.

In that sense, it’s a normal game that Drifter created without having to give up a bunch of its own equity in a venture capital deal. Yet Drifter is also releasing a version where players can buy NFTs. The financing from Gala Games allowed the company to grow to 36 people and survive while developing Superior. And it also enabled them to make both the Web2 game and the Web3 game at the same time.

But in contrast to many other blockchain games, Drifter has something real to show. The game can be Hades-like in its roguelike gameplay. It can take as much as 15 hours to take down a boss, and the game has three bosses at the moment, Murphy said.

More bosses will be launched after the game comes out, he said. Over time, the company hopes to add more modes, such as player-versus-player.

Davis noted the reaction to blockchain games is similar to that of generative AI. Some people think it’s cool and others think it is full of scams. But the team focused on the notion that players can decide to sell their game character if they decide to do so. The blockchain tech enables them to do that. Web3 players can buy character cosmetics or character variants. But the team stayed away from using NFTs to enable players to “pay to win.”

“Where we focus on is to make sure we’re making the most fun, playable game, and then engaging with audiences that that are passionate about these different technologies,” Davis said. “And our early previews with the Gala community have been incredibly positive. You know, people are super excited. There is a strong desire for real content. This is a fun game to play with your friends. Let’s start with that.”

“I wouldn’t even dare try to predict how this is going to play out,” Murphy said. “We don’t want the business model to ever hurt the gameplay experience. We recognize there are two very different audiences we are trying to cater to. We’re paying close attention to what is happening around us.”