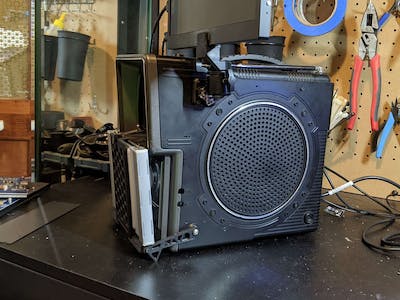 The term “cyberdeck” has no official definition — it isn’t like there is some governing body that publishes cyberdeck standards. We know that the term originates with William Gibson’s Neuromancer novel from 1984 and that is where the modern cyberdeck community found its inspiration. We don’t have the technology to create the cyberdecks that Gibson described, so the popular definition evolved to encompass most cyberpunk-themed custom portable computers. Maybe this is a “you know it when you see it” type of situation, but we can’t figure out whether or not to call MostlyAwol’s TekMate KH-80 a cyberdeck.

For one point in the cyberdeck column, MostlyAwol calls the TekMate KH-80 a cyberdeck. It also has clear cyberpunk aesthetics, so it gets another point in that column. It’s certainly custom, so now the cyberdeck column is getting big. But then we come to the “portable” part of the popular definition. The TekMate KH-80 is only portable in the same sense that early luggable computers were, because it has a handle and a user could carry it somewhere to use it. But by that standard, any computer that a person can lift would be portable and we’d argue that is a poor classification. It doesn’t run on battery, which we think might be the defining factor — it’s hard to call something portable when it’s tethered to an outlet.

Semantic debate aside, the TekMate KH-80 is very cool. MostlyAwol built it into the case of an old Hitachi K-1100 5” black and white portable TV from 1980 that screams “cyberpunk” at us. The original CRT was failing, so MostlyAwol replaced it with a modern Waveshare 5.5” AMOLED screen. A second 10” LCD monitor attaches to a ball mount on the enclosure, so it can fold down for transportation. There is also a foldable Bluetooth keyboard that tucks up against the front of the enclosure when not in use.

MostlyAwol had plenty of space inside Hitachi enclosure, so he decided to do a full ITX PC build instead of using a Raspberry Pi single-board computer like we see in most other cyberdecks. The specs are decent, with an Intel i7-6700K, 32GB of Corsair DD4 RAM, and a 512GB SSD. MostlyAwol wants to try to fit in a graphics card to complete the build. One of the original control knobs was replaced with a USB 3.0 port and the volume/power knob was converted into a momentary power switch for the PC. MostlyAwol used an Arduino for that conversion.

While we can’t decide if the KH-80 is technically a cyberdeck, it doesn’t really matter. What matters is that it looks cool and is functional, so it fits the spirit of the cyberdeck community.