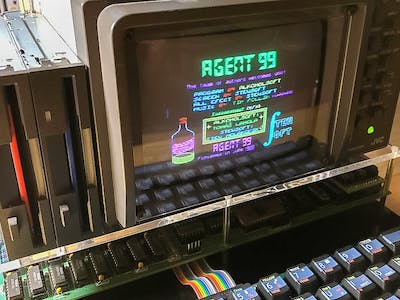 During the eight-bit computer era, it was commonplace for engineers (and hackers) in European countries to sell clones of computers from other regions. For example, Cobra was a Romanian clone of the Spectrum 48K with a few improvements. In the late 1980s and 1990s, students often built their own version of the Cobra design — clones of clones! Drawing on their inspiration, Thomas Sowell set out to clone the Cobra.

The original Spectrum 48K had a Z80 microprocessor running at 3.5 MHz with either 16K or 48K RAM. It could draw bitmap graphics and make beeper sounds. Unlike the Commodore 64, there was no dedicated graphics or sound chip. However, an uncommitted logic array (ULA) did combine a large number of discrete logic chips into a single IC. Last, BASIC was in ROM. For storage, a user could save and load software to cassette tape.

Cobra had a similar base design with a mod available to increase the RAM to 80K. It also added a floppy disk interface. That addition, plus enabling additional address modes for the Z80, meant that Cobra could also run CP/M software. (CP/M was a prevalent cross-machine operating system at the time.) However, unlike the Spectrum 48K, Cobra did not have a ULA. Instead, an array of 7400-series logic chips implemented the 48K’s ULA functions.

As Sowell notes in his blog, it is rather remarkable that people were even able to reverse engineer the ULA, and overall Spectrum design, without (decent) oscilloscopes or logic analyzers!

Sowell’s Cobra clone implements the core Cobra features across five circuit boards. A unique design constraint is how Sowell sourced the ICs. All of the chips are from the USSR (bought in early 2021), East Germany, Czechoslovakia, and Baneasa. This small detail makes for a very authentic clone!

Overall the design has been a success. After some hardware debugging sessions, it runs BASIC programs intended for the Spectrum and can boot CP/M while in the 80K RAM mode.

For additional improvements, Sowell designed custom keycaps to mimic the Spectrum’s keyboard and used WASD Keyboard‘s custom service to create the (ink) printed keys. Also, Sowell added a sound card based on the AY-3 synthesizer chip. Cards (or add-ons) based on this chip were popular with Spectrum 48K and Cobra owners.

Interestingly, Sowell wrote the original Cobra clone post in Romanian. However, Google Translate does a surprisingly excellent job translating the article into English. For design files, this Sowell’s GitHub account has repositories that break down each Cobra clone component.