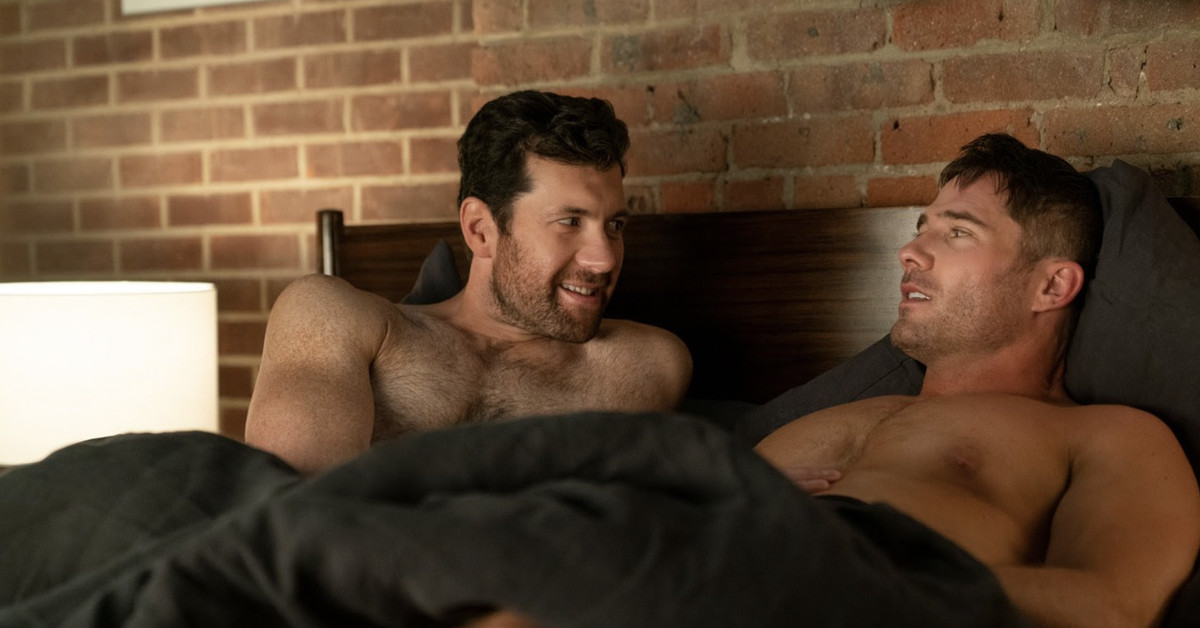 Billy Eichner seems like the fun kind of grumpy — like a person who will say the mean stuff you’d wish you could say out loud. Eichner rocketed to success and visibility based on his ability to charmingly harangue New Yorkers on sidewalks. Then on Difficult People, he sharpened that crankiness and pop culture savvy into an acidic, narcissistic lead also named Billy, in a show that’s loosely based on his and his friend Julie Klausner’s lives.

The underlying irony of Eichner’s humor is that the crankiness is blazing insecurity, the meanness is neurosis, and his self-absorption is a symptom of being his own biggest critic. He’s hilarious and caustic, but you probably wouldn’t assume he’s a romantic.

Eichner is now starring as Bobby in Bros, which he co-wrote with director Nicholas Stoller. In it, he flexes a similar smart irritability that we saw in Difficult People and Billy on the Street — this time, in a rom-com. (Eichner has maintained that the movie isn’t strictly autobiographical but that it does borrow from his own life.)

Romantic comedies are rare at this point, and romantic comedies about two gay men, starring two gay men (and an all-LGBTQ cast) are even rarer. Bros has the unfortunate pressure of being revolutionary by simply existing. Never mind that “revolutionary” in this case is more about how slow mainstream Hollywood can be when it comes to depicting LBGTQ relationships rather than any genuinely groundbreaking concepts that Bros contains. That’s an incredible amount of pressure to place on a movie about two conventionally attractive (one looking like a Marvel superhero) cis, gay white men who fall in love.

It’s not a particularly easy position to be in.

Eichner has drawn fire for trying to talk about the importance of Bros while simultaneously, and perhaps inadvertently, putting other LGBTQ movies down. He also has described the act of seeing the movie as a form of active resistance against Supreme Court Justice Clarence Thomas’s view on gay rights. I do not believe Bros’ box office will necessarily determine the future of Obergefell v. Hodges.

But the movie is concerned with the specifics, meaning, and pressures of gay culture. As its title suggests, Eichner’s script roasts gay male culture and its obsessiveness with masculinity and muscles. The way traditional, heterosexual masculinity is lauded in gay male culture is a gay conundrum that should be made fun of more, and Eichner is more than skilled at doing so.

What caught me off-guard, though, is how thoughtful Eichner is when it comes to mapping out his own character’s vulnerability. In a way that his comedy often elides, Bros has Bobby connecting the dots between cynicism and a pursuit of happiness. It’s terrifyingly intimate territory. I thought I knew Billy Eichner to be someone cynical, who’d written off romance, but Bros reflects a curiosity about how love functions in the heads and hearts of gay men. It’s a question worth exploring.

Bros is a story of a neurotic boy standing in front of another boy, asking him to love him

Bros operates on a gimmick: It asks explicitly what a gay love story could look like, free from hetero norms, and then, by coincidence, its hero has a chance to answer that question.

The question comes to Bobby at work. He’s an award-winning podcaster who lands a dream gig of curating the country’s first LGBTQ+ museum in New York City. The museum gig is a vehicle for the movie to talk about queer history. Specifically, it’s a chance for Bobby to wrestle with the idea of how much same-sex marriage — the biggest pop culture touchstone when it comes to gay rights — factors into the identity of the museum and his own identity as a gay man.

Bobby is an intellectual and political crank, an antithesis to the movie’s title. “Bro” itself implies a simpleness of being. Bros are part of the same genus as himbos, a laid-back species of masculine men. Bobby’s never laid-back; he’s argument-prone and hyper-aware. He’s funny in a way that complaints about failing bodies are funny, and watching him navigate through the world of gay male desire — hookup apps, flirty texts, DMs slides, and circuit parties — is sometimes hilarious, often at his own expense.

Same-sex marriage ushered in a wave of tolerance and economic benefits for LGBTQ people, but Bobby’s a bit skeptical. To him, the advantages of gay marriage have also come at a price: the sanding down of the edges of gay life (even if he’s not partaking in those edges) into something more palatable for straight consumption. The years and years spent trying to convince straight people that LGBTQ people are just like them was maybe too effective, particularly when it comes to sex and romance.

To Bobby, straight people love Schitt’s Creek and its earnest gay romance because it’s egregiously, dopily unsexy — also the big reason he hates it so much. And oh my god, does Bobby really hate Schitt’s Creek.

Since he doesn’t want the museum to pretend that same-sex marriage is the final, happy ending for queer rights, Bobby challenges his colleagues and his friends to imagine what an actual gay love story for gay people looks like. It’s a clever nod to the problem of creating a gay rom-com that doesn’t look like the same old straight stuff.

Then, at a shirtless party, Bobby meets Aaron (Luke MacFarlane), a lawyer specializing in estate planning. That means that Aaron helps people draw up paperwork and decide where their money will go when they die. But Aaron doesn’t look like the kind of person who would have this job, gently guiding people to death. Aaron looks like a Barry’s Bootcamp instructor, someone you pay to be mean to you in a fitness way. He’s the kind of handsome that you can’t tell if you’re attracted to him or just want to have his pecs.

Bobby and Aaron’s meet-cute isn’t really a conversation since the music is too loud (one of my homosexual friends refers to the music played at shirtless gay dance parties as “bing bong stuff”). It’s also not really a conversation because Bobby is mostly just yelling complaints about the party at Aaron. It works though, and Bobby and Aaron spend the rest of the movie figuring out whether and how much the other one likes them.

There’s plenty of guy-on-guy sex happening in Bros, some of it hot and fun, some of it silly, and some of it both. Again, because of the relative lack of big Hollywood movies centering gay men and the sex they have, showing gay group sex might be seen as audacious or groundbreaking. But the most daring thing Bros does is trace the psychology of Bobby’s emotional intimacy.

Bobby is hesitant to open up to Aaron, in large part, due to not feeling handsome or muscular or successful enough to warrant the affection of someone who is as handsome, as muscular, or as successful as Aaron. Admittedly, I’m not up to date on the latest heterosexual trends and best practices, but I don’t believe feeling like someone is out of your league is exclusively a queer problem.

There’s plenty going on beneath the surface, though.

As Bobby tells Aaron, he spent his whole childhood and adolescence being told to be anyone but the person he was. It’s a common experience for many little gay boys. Those kids grow up and that message takes its toll. Many gay men then spend an inordinate amount of their adult lives unraveling that damage, cleaving away the artificial parts of themselves they’ve built to find acceptance and finally rediscovering, sometimes too late, the tender bits that they discarded.

A lot of the movie and a lot of Eichner’s comedy satirizes this trauma, stretching it to the point of neurotic derangement — Eichner once told James Corden and a slightly unamused Riley Keough about not feeling handsome enough to warrant a happy ending after a massage. Bobby’s insecurity, his deep belief that everything — Aaron, his job, his success — can be yanked away at a moment’s notice, comes from the same place as the stress of not being hot enough for a hand job, but it’s delivered without the defense humor provides.

When the movie gives us a glimpse into Aaron’s life, we see what these very different men have in common. They have the same experience of hiding themselves, but just broke in different ways. Aaron compensated by following a career path and workout regimen that was supposed to get him to a place where he’d be happy. Despite the abs, wealth, and validation, his happiness is also unfortunately tethered to a fear of losing it all.

Love, then, is a surreal thing for two men who have constantly been told it’s conditional. It’s somehow even more fragile when they come to the realization that they want it. Bobby and Aaron’s relationship is as much a negotiation of their own hangups and feelings of desire as it is wading through each other’s fears and insecurity to better understand each other. And of course, that’s exactly the kind of complicated gay love story that Bobby would love to see reflected in his museum exhibit.

The pressures of gay life — whether that’s adhering to and later breaking norms in search of happiness, navigating sexual and aesthetic expectations, trying to forge an authentic life, or even speaking for the community through a museum exhibit or a de facto revolutionary movie — can feel enormous. And it’s thrilling to see it explored in romantic comedies like Bros. Hopefully, though, there’ll be a time where there’s not so much pressure to be “revolutionary.”