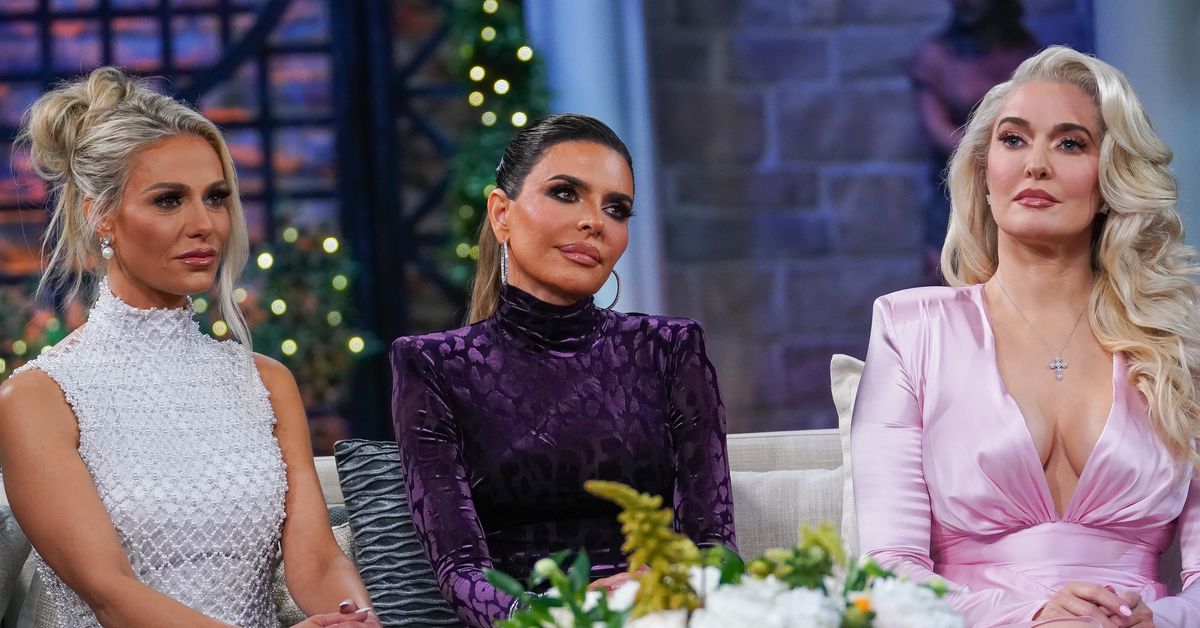 Some people have sports. Others, straight women and gay men especially, have Bravo’s Real Housewives. Fans tune in every Monday, Tuesday, Wednesday, and Sunday night to watch women from various regions in the United States risk their dignity and cut one another down via gossip and bitchy confessionals.

But just like sports, the shows themselves can be impenetrable to outsiders.

Many of these women are not housewives, but single, or divorced, or in the process of getting a divorce. Some of them don’t live in the cities that their shows are based out of. And given that cameras follow their every move and their appearances are based on contracts, it’s a stretch to call the circumstances of their existence “real.”

Instead of points per game or efficiency, when Housewives fans discuss their faves, the stats are wines thrown, insults lobbed, and parties ruined. And just like circuitous conversations sports fans have about who is the GOAT, Housewives fans have their own complicated criteria for what makes a “good” or “bad” housewife. It can be difficult to grasp.

In an effort to lend clarity to this phenomenon of “good” wives behaving badly, I spoke to the foremost Bravo expert in the land, Brian Moylan. Moylan is the author of The Housewives: The Real Story Behind the Real Housewives and veteran Real Housewives recapper. He’s studied the Housewives for years, and if there’s anyone who can explain what makes these shows tick and what makes these women occupy such prominent positions in pop culture, it’s him. And according to the scholar, it’s a combination of absurdity, pettiness, delusion, and, maybe surprisingly, a lot of joy.

So Brian, how would you explain a “good” housewife and a “bad” housewife to a complete normie?

One of the things I love about the fandom is that, no matter who the housewife is, there are people that love her, and there are people that hate her. And so I think to everybody, there are differences on what makes a good housewife and what makes a bad housewife. And I think if you ask most fans, it’s just who they like and who they don’t like. So, I don’t think it’s really scientific. I also think that there are different kinds of fans.

I’m a fan. You’re a fan. What kind of fans are we talking about? In your book, you talk about “sincere” fans and “ironic” fans. What’s the difference?

“Sincere” fans are people who want to be on Housewives. They emulate these women.

They’re the people who are like, “Oh my god, if Andy Cohen did a Real Housewives of Cincinnati, I would be so good.” Those are the “sincere” fans, and they tend to like people who are more dramatic. Those are women who are bringing the fights, who are bringing the craziness, who are stirring up trouble, who are making the storylines happen on the show, women like Lisa Rinna or Kenya Moore.

I feel like when you say those names, for seasoned Bravo watchers, it brings to mind a very specific kind of housewife. Like there’s a distinction between whether this person is good TV and whether this person is a good person. You can love someone on television and recognize that they create fantastic reality TV moments and at the same time realize they might be an emotional terrorist in real life.

I mean, there’s some of both types [of fan] in all of us. I tend to be more on the ironic side. I like someone more like Sonja Morgan. She doesn’t know what she’s doing, necessarily. But she’s amazing to watch because there’s like a deep darkness inside her. She’s trapped in the past, like, it’s a very Blanche DuBois kind of thing.

I think that there’s a difference in Housewives where there’s someone like Sonja, who’s good at her job just by being an interesting person. And she’s bringing something to the show by reacting to it, being part of it, and she’s engaging to watch. But then there’s someone like Kenya, who is good at her job, where she’s showing up with the “cookie lady,” she’s showing up with the marching band, she’s driving the storyline forward.

Kenya will instigate. She will show up with the scandalous “cookie lady” who’s at the epicenter of one of the husband’s cheating allegations and make sure the cameras are rolling. In real life, that’s mortifying and awful, but on the show, fans love it.

But sometimes they don’t. This past season on Beverly Hills, Lisa Rinna brought all the drama in her spat with Kathy Hilton. And I don’t know if this is real life, since I’m terminally online, but it just seemed like everyone hated her — on Twitter, on Instagram, on every platform, people just wanted her off the show and would talk about her like she was a demonic entity. Her contract wasn’t renewed for the upcoming season.

S​​he flew too close to the sun.

She flew too close to the sun! She was creating a gripe that wasn’t there. Whereas when she’s breaking a glass at Kim Richards, that was Lisa being her real self and then you’re like, “oh, bitch, I fucking love you.”

I want to ask you about the reaction though. You need villains on the show. These shows aren’t about friendships and everyone getting along. As much as people say they’d like it, no one wants to watch that!

I think that we need to respect the villains on the show because they do drive these storylines. Lisa Rinna pointed out she got booed at Bravo Con, and she said afterward that in professional wrestling, there are people who get booed all the time and they’re some of the biggest stars. And I agree with her! We do need some of that. But you need somebody who’s coming from a place of authenticity and someone who also allows themselves to really be vulnerable.

A term that gets tossed around when we talk about Housewives is how it’s almost like a game or a team sport. There are housewives that know how to play ball, and know what good television is. A Housewives does not happen in a bubble; so many franchises have had multiple seasons and some go all the way back to 2006. At this point, when someone is cast, they have to know what to expect, right?

When it comes to the “team sport” aspect, I think the key is that every show has an ensemble cast. Everybody has to play their part. If you had all Kenyas or all Lisa Rinnas you would be exhausted. All Sonja Morgans and all Shannon Beadors? Exhausted! You need housewives like Emily Simpson, who’s going to be in there and kind of make fun of it, and be the voice of reason. And so I think that that also makes Emily a good housewife, even though she is not doing some of the other things that the women are doing.

Or you look at early seasons of Bethenny Frankel and Carole Radziwill. Women like that are your kind of fan surrogates, people who you actually want to be friends with. I think that everybody needs to play their role. And I think that the best housewives know their role, know who they are, and show up as themselves to live authentically.

I think we’re getting to a question I want to ask but sideways which is: What makes a bad housewife?

The most recent and maybe the biggest flop in recent memory is Beverly Hills’s Diana Jenkins. Housewives fans rarely agree on much, but they seemed to be united against Diana. And I think what was so weird is that you had a woman that on paper — rich, kind of bitchy, had the self-awareness to make fun of herself, was sort of like Jennifer Coolidge’s Tanya on The White Lotus — and the fans absolutely did not like her.

You think about it, and ​she’s everything producers want. She’s attractive. She has the trappings of wealth. She’s married to a hot guy. She has famous friends. But yeah, she seemed like she didn’t want to be there. She was not interested in this enterprise whatsoever.

When I was researching the book, I talked to a producer who said that what you need to do is figure out why each of these women are on the show and that is their storyline. So it’s like they’re looking for love. They’re looking for a business. They want to be famous, whatever.

With Diana, I don’t think I ever figured out why she was there.

It’s hard to say who the worst housewife is. Because usually, if they’re bad, they’re gone. The worst housewives are women who are just boring and who can’t deal with the show.

I want to ask you about this last season of Salt Lake City. What a horrendous experience for everyone involved. What went wrong?

This season of Salt Lake City, we saw what happens if you were to cast all Lisa Rinnas. Like, all of these women were trying to make storylines happen inauthentically against the other women because they all hate each other. I wrote about this in my newsletter recently, like, I’m a little worried about some of the Housewives because they seem miserable.

Okay, but if I had to deal with Ashley, Gizelle, and Robyn I would be miserable too.

But Karen Huger? Miserable. She does not want Charrisse there. You look at Teresa and Melissa Gorga on New Jersey — miserable. They can’t be around each other and don’t want to breathe the same air.

So I think what you’re saying is that Housewives need to be a little joyful.

There needs to be a certain aspect of fun. And I kind of contrasted those people to what we’re seeing right now on Real Housewives of Miami.

Miami is so good.

Those bitches are showing up to a dog birthday party at a beach. They are happier than they have ever been in their lives. And I think the difference is for a majority of the cast of Real Housewives of Miami, they had the show taken away from them. They know what they lost. And they’re like, “I’m just happy to be here, I’m happy to be at the party, I’m going to have a great time, I’m gonna take every bit of juice from this I possibly can.”

Miami gets it. I feel like at the end of the day, it seems like the women realize that it’s all sort of idiotic and they can all be stupid together and get in a pool, be drunk, and laugh at each other and at themselves. You don’t get that sense with some other Housewives.