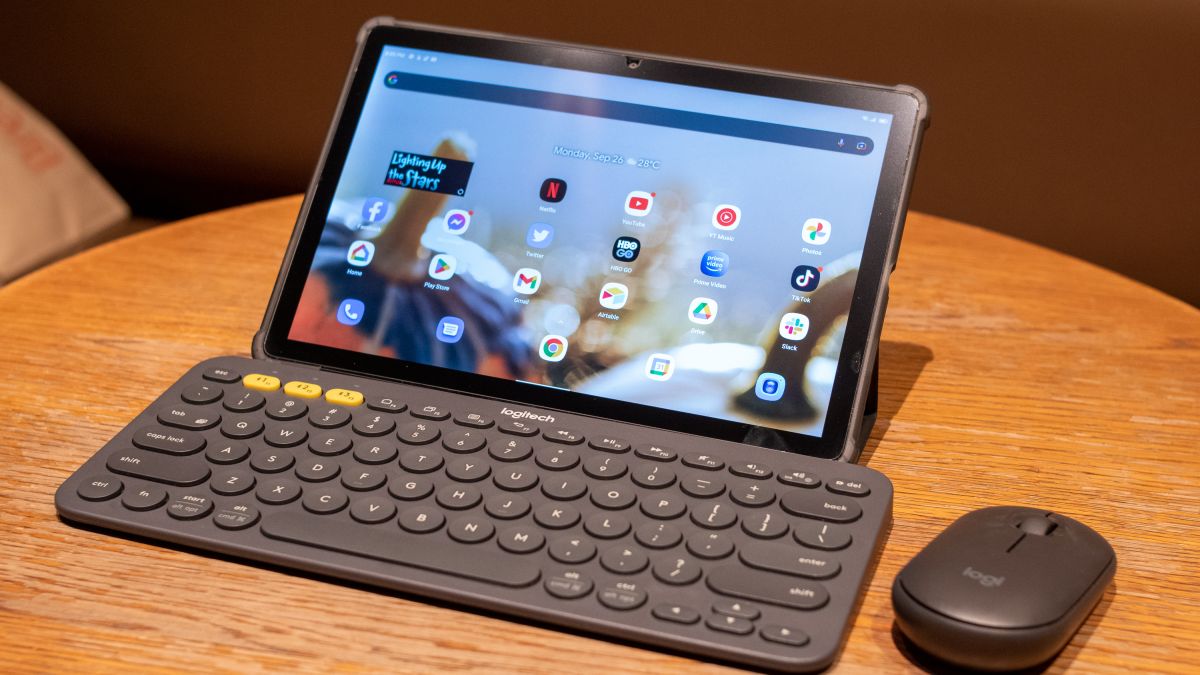 If you have forgotten that Android tablets still exist, you are not alone. The meager attention given to tablets over the past few years has made me feel like they are being treated as second-class citizens. Despite being put on the backburner, Android tablets often get the job done if you’re looking for something to watch movies on or to multi-task while away from your office.

In that regard, the Blackview Tab 13 fits the bill. Blackview’s latest slate should be right up your alley if you’re on the hunt for a tablet with an impressive design and performance for as little money as possible. It’s also the sort of tablet that can be passed over to children, making it a worthy contender for the best Android tablet.

While Blackview is best known for producing many of the best rugged Android phones, it also makes tablets. But is the company’s latest model in the Blackview Tab line any good? We’ll find out in this review.

The Blackview Tab 13 launched in late August for $150, which gets you 6GB of RAM and 128GB of internal storage. The tablet only comes in a single memory and storage variant.

It will be available in the United States and the UK beginning in October. Currently, the tablet can be purchased in other markets, including Asia and some parts of Europe. In many Asian countries, the device is available for $200 via Blackview’s online storefront (opens in new tab) and AliExpress.

One thing I love about the Blackview Tab 13 is the display. It’s nice to look at, with a wide screen ideal for watching Netflix shows and movies. It comes in at 10.1-inches across the diagonal with a resolution of 1,920 by 1,200 pixels, producing sharp text and clear icons. It has by far the best display I’ve seen in a budget tablet, and I find it perfectly adequate for web browsing and content consumption.

However, at this price, you can’t expect to get anything more than the standard refresh rate (60Hz), high pixels-per-inch density, and impressive brightness (more on that later). When compared with other tablets in its price range, the Tab 13’s screen actually stacks up against the competition.

During my testing, I did not have issues browsing the internet, scrolling through social media timelines, creating documents, or sifting through emails. Its wide screen is a generous enough size both for content consumption and multitasking.

The tablet also features a PC mode, which is found on other tablets manufactured by Huawei and Xiaomi. This means you don’t need to wait for Blackview to upgrade the tablet to Android 12L (if at all) in order to enjoy this desktop-like experience.

The feature is easily accessible through the quick settings menu, automatically turning the tablet into a PC. Like the desktop mode on Android 12L, it features a taskbar at the bottom to let you open multiple app windows simultaneously, and in my experience, it was a joy to use if you’re multitasking.

In addition to the spacious display, Blackview stuffed the tablet with reliable hardware. It has a metal chassis, loudspeakers on the top and bottom sides, USB-C for charging, and a microSD card slot for storage expansion. Blackview also offers some first-party accessories for the slate, such as a protective case that doubles as a stand.

The tablet also boasts a decent color balance and contrast, making the screen largely impressive, all while it seems clear that Blackview has skimped on some aspects.

The tablet’s design also deserves a compliment. It looks more expensive than it really is. While it is barely premium when it comes to its appearance, the Blackview Tab 13 managed to put together a stylish look without cranking up its price.

I also like the aluminum back of the tablet, which gives it a nice matte texture, as well as its metal frame that makes it feel robust, so you can confidently slide it into your bag without worry. It also has squared-off edges à la Samsung Galaxy Tab S8, which adds a premium feel to it.

Playing games was also a smooth experience, thanks to the tablet’s 6GB of RAM, which can be expanded to 10GB with a 4GB virtual RAM expansion feature. It’s one capability you don’t often find in a tablet around this price segment.

It’s also lightweight and comfortable to hold. Weighing just 450 grams, you can just about manage it with one hand for several minutes without wracking your nerves.

Battery life on the Blackview Tab 13 is stellar. The 7,280mAh battery inside is more than enough to keep the lights on through a long day. During my test, the tablet easily endured 30 hours of normal tasks, which is on par with the more expensive rivals. However, if you’re watching videos or gaming all day, the tablet will probably need to be charged before bedtime.

You can also rely on the camera on the tablet. This is quite surprising given that tablets are not typically used to take photographs. The Blackview Tab 13 has a dual rear camera setup that takes decent pictures. The edges are sharper than on most tablets I’ve used in the past.

The selfie camera doesn’t disappoint as well. I would say the front and rear cameras are two of the biggest strengths of the tablet.

In low light situations, however, the performance of the camera is not up to snuff, and this is obviously an area where corners have been cut.

Blackview also did an excellent job with the speakers. In terms of audio capabilities, the tablet punches above its weight with dual loudspeakers onboard. The sound is great for watching movies or listening to music, with rich and detailed sound.

The slate includes a MediaTek Helio G85 chipset onboard, so you can expect above-average processing speeds. The processor is beefy enough to power the tablet through most tasks you throw at it, though there are some hiccups in the work that I’ll discuss later.

While the Blackview Tab 13 has an immersive screen for binge-watching your favorite shows and movies, it isn’t great for viewing in bright sunlight. With a maximum brightness of only 300 nits, it’s got a dim display unless you use it indoors. You’re probably going to want to jack that up to its upper limit most of the time. Even so, you’ll have to squint a bit in order to see the screen clearly. But for a $150 tablet, you should keep your expectations in check.

You’ll also want to constantly save your work when using the device for your office projects, as it randomly closes apps on rare occasions. There’s also a slight delay when opening menus, launching apps, or switching between screens.

It sometimes turns the screen off, too, getting in the way of watching videos on the tablet. I bet this is only a problem limited to pre-production units of the tablet, hopefully.

Blackview has also cut some corners when it comes to charging speed. In my test, it often took almost forever to fully juice up the tablet from zero to 100%.

I would have liked to test the tablet’s main talking point during its launch: the SIMO technology support. It’s essentially an e-SIM feature that allows the device to connect to the internet even without a Wi-Fi network or SIM card. However, since e-SIM isn’t supported from where I live, I didn’t get the chance to try it out.

Don’t expect a couple of years of software support from Blackview. Like its rugged phones, the Tab 13 won’t be upgraded past Android 12.

You won’t find a considerable number of Android tablet competitors in the $150-$250 price range. The Nokia T20 falls in the same range, with a nearly similar display and bigger battery. However, the Blackview Tab 13 beats Nokia’s contender in the camera and chipset departments. The Nokia T20’s Unisoc T610 processor paired with up to 4GB of RAM is a mediocre performance.

The $260 Lenovo Tab P11 Plus is also a close rival. Like the Tab 13, Lenovo’s slate is only eligible for one OS update. It has a bigger screen at 11 inches, with a 1200 x 2000 resolution, as well as more powerful sound thanks to its Dolby Atmos speakers. That said, it is powered by an aging MediaTek Helio G90T for a higher price than the Tab 13.

Samsung also offers great software features like multi-window support and DeX Desktop. In that regard, the Samsung Galaxy Tab A8 is worth recommending, with a 10.5-inch display, 8MP/5MP cameras, quad speakers with Dolby Atmos, and a 7040mAh battery with 15W charging. Naturally, making a choice depends on what you are looking for.

Blackview Tab 13: Should you buy it?

You should buy it if…

You should not buy it if…

It is easy to include the Blackview Tab 13 in your shortlist if you want a value-for-money tablet with decent performance and specs. While I found a few things to complain about, the overall experience across the board is fine. With a robust chassis, great display for media consumption, and stellar battery life, the Tab 13 ticks nearly all of the boxes.

It’s interesting to see more manufacturers taking an interest in making Android tablets. The Tab 13 is something that you can bring inside a coffee shop and attract an admiring glance or two.

For a tablet this cheap, you won’t mind the slight delay in opening apps, switching between apps, and shifting from landscape to portrait mode. More importantly, these tradeoffs shouldn’t be a deal-breaker, as the tablet is able to run any app you load up on it. However, power users are better off looking for beefier hardware than the Blackview Tab 13.