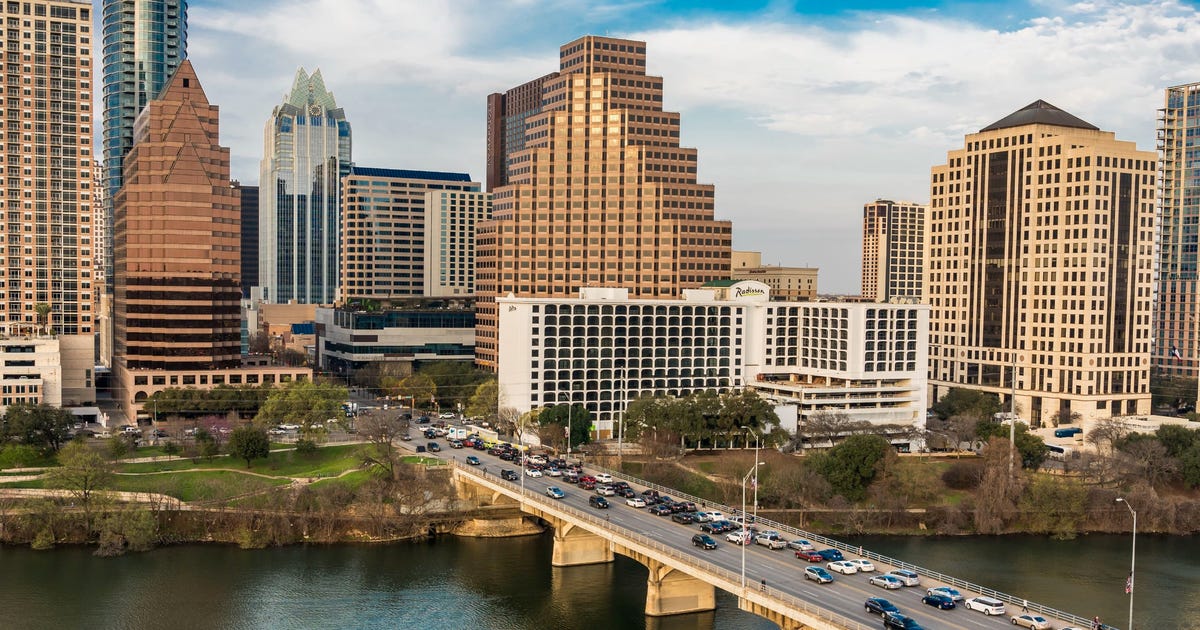 Austin likes keeping it weird. But ask anyone who works and lives there: They also like their internet fast. In fact, they’re one of the fastest metros in the US when it comes to internet speed. Thanks to its multiple fiber options, Austin has a spot among the top 10 fastest cities in the country.

The speed-testing site Ookla keeps track of the top cities in the US for median download speeds based on millions of tests run daily by the company. In Ookla’s latest reporting, Austin — the country’s 28th most populous metro area — ranked as the sixth fastest city, registering a median download speed of 239 megabits per second. That was good enough to place ATX well ahead of its Texas big-city siblings Dallas and Houston.

Shopping for a faster internet speed?

We’ll send you the fastest internet options, so you don’t have to find them.

One thing to note about those speeds: Austin gets a boost from the fast fiber options found within city limits, including AT&T and Google Fiber, and the wide availability of the consistent cable connection provided by Spectrum. But if you venture beyond Travis County to Round Rock, Georgetown or some rural areas east of Austin, you won’t see anything close to those median speeds. Apart from last-resort satellite options like HughesNet and Viasat, there are some regional fixed wireless solutions, as well as the option to explore 5G home internet (though availability is limited more closely to the Austin-Round Rock-Georgetown hub).

That means you’ve got plenty of internet options to sort through in the Austin area. Whatever those options may be at your address, we’re here to help you comb through your choices. Here’s what you need to know about the best internet providers in Austin.

Admittedly, this was a tough call. AT&T was nipping at the heels of Google Fiber. But not all Austin residents are serviceable for AT&T Fiber. Many still have to deal with AT&T’s DSL service, an inferior product whose download speeds max out around 100Mbps, and in some areas, tops out at only around 25Mbps.

Conversely, if you have access to Google Fiber, you know exactly what you will get — 100% fiber-optic internet service with symmetrical download and upload speeds. Google Fiber features only two plans — 1,000Mbps and 2,000Mbps — but each has fast internet speeds, no data caps, no contracts and no additional equipment rental fee. Google Fiber may not be your top selection if you’re looking for a cheap internet option. Still, in terms of value, Google Fiber stands tall: The gigabit plan at $70 a month has an affordable cost per Mbps of 7 cents, while the two gig plan boasts an even better 5 cents per Mbps.

As for where you can find Google Fiber in Austin, your best bet is in the heart of ATX, including the South Lamar, South Congress and East Austin neighborhoods. But service is also beginning to extend towards the north portion of the city, including the Allandale, Mueller, North Loop and North Shoal Creek neighborhoods.

Charter Communications’ broadband service covers a large swath of the Austin city limits and beyond, including down into Kyle and Dripping Springs and up north into Pflugerville, Round Rock and Leander. That’s especially helpful if you plan to move within the area and don’t want the hassle of setting up with a new service provider. The company’s home internet service also includes the modem in the monthly costs (though you’ll need to add $5 a month if you want a Wi-Fi router).

Also in Spectrum’s favor is its straightforward approach. No matter where you’re located, you’ll have three plan options — 300, 500 or 940Mbps download speed — and no fear of additional fees from overage charges since there are no data limits. While its upload speeds top out at 35Mbps (which falls well short of what fiber internet can achieve), Spectrum’s reliability compared to the more spotty DSL and satellite internet services that are also prevalent in the area is tough to overstate.

T-Mobile and Verizon have been pushing hard for their 5G internet services, but T-Mobile Home Internet gets the nod here for the Live Music Capital of the World. A MoffettNathanson report from April 2022 used Comlinkdata to surmise that approximately a third of T-Mobile Home Internet subscribers are from rural areas, even though less than 10% of the company’s current footprint is rural. So, T-Mobile Home Internet, in just over a year of business, is becoming a viable option for many where DSL or satellite had been the only choices.

While you’ll find the Austin area included in T-Mobile’s coverage list for Texas, you’ll still need to confirm it’s serviceable at your location. You can plug in your address (or your mobile phone number if you’re already a T-Mobile customer) on the T-Mobile Home Internet site to find out if it’s available for you.

Who are the other internet providers in Austin?

Many broadband options exist for those living in the Austin-Round Rock-Georgetown metro area. Beyond the top three picks we highlighted above, you can find quite a mix of choices, though a few are available only on the outskirts of the surrounding counties.

Additional details on Austin home internet you should know

The average starting price for internet service in Austin — taking into account the promo prices, not the elevated regular rates — is approximately $43 per month, which puts ATX right in the middle of the pack of the other markets CNET has covered to this point, including Brooklyn ($36 a month), Los Angeles ($38 a month), Denver ($39 per month), San Francisco ($40 a month), New York City ($41 per month), Seattle ($42 monthly), Dallas and Philadelphia (both near $43 per month), Houston ($45 monthly), Phoenix ($46 per month), Atlanta ($47 monthly), Orlando and San Antonio ($48 a month) and Charlotte, Chicago, Las Vegas, San Diego and St. Louis (all approximately $50 monthly).

Currently, the lowest starting price you can find in Austin belongs to Rise Broadband, which has a 25Mbps plan starting at $25 a month. Impressively, the standard price only jumps by $10 after the first year.

That said, I have to bring up a plan I mentioned earlier: For just a dollar more per month, Astound Broadband has a 400Mbps cable internet plan. If it’s available at your address, that’s the best value.

Speaking of value, most of the providers we’ve listed are also participating in the Federal Communication Commission’s Affordable Connectivity Program. This FCC initiative provides a $30-a-month discount to qualifying low-income households to help them find affordable, high-speed internet. If you qualify, the ACP benefit can be used towards any internet plan from participating providers. In some cases, especially from the 20 providers who recently partnered with the White House on its digital divide initiatives, you might be able to get internet service for free.

As I mentioned at the start of this article, Austin holds some bragging rights as one of the country’s fastest cities in terms of median download internet speeds. If you live on the outskirts of the Austin-Round Rock-Georgetown metro area, you might be surprised to hear that since fixed wireless or satellite service might be all that’s available to you. But people within the city limits have access to the superior speeds of fiber internet service, tilting the scales here. Case in point, Ookla’s data tags Google Fiber as the fastest provider in Austin, with a median download speed of approximately 269Mbps.

Within the city limits of Austin, cable internet is still the most ubiquitous internet connection you’ll find. And as far as cable internet providers go, Spectrum and Astound Broadband present solid value with their offerings. But as we’ve often mentioned in our CNET home internet coverage, fiber internet trumps cable every time. If your address is serviceable for Google Fiber or AT&T Fiber — and thankfully, both companies are continuing to expand their fiber networks within ATX — then you shouldn’t give signing up a second thought.

Which is the best internet service provider in Austin?

If you consider the greater Austin-Round Rock-Georgetown area, there are at least 17 different internet service providers available to the more than 2 million people living in the ATX metro. Those residents aren’t serviceable for all 17 ISPs, so sometimes, the best internet service provider is simply the available one. In Austin, the providers with the widest availability — outside of satellite providers — are AT&T and Spectrum.

Are there fiber internet providers in Austin?

Yes. AT&T is perhaps the most widely available provider in the area, and although not all addresses can get its fiber service (DSL is still prevalent), access to AT&T Fiber throughout the area is growing. Google Fiber is also available within city limits.

What is the cheapest internet in Austin?

Regarding value, Google Fiber’s 2 Gig plan, at $100 a month, is great at 5 cents per Mbps. The only provider in ATX with a better cost value is AT&T’s Fiber 5000 offering, which at $180 (which isn’t cheap), features a cost per Mbps of just under 4 cents.