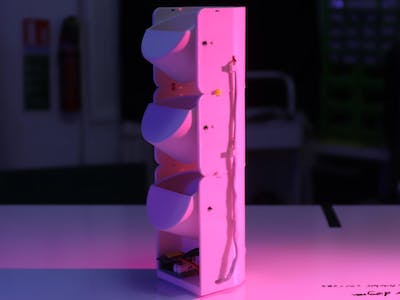 I’m in my mid-30s and like everyone else who can hear Death’s approaching footsteps, I have a whole bunch of pills I have to take each day. To remain consistent, I have one of those daily pill containers. But that still forces me to spend some time each week filling the pill container with my various medications. I’m now rethinking that approach after seeing the convenience of Mellow_Labs’ automatic pill dispenser.

This is actually the eighth revision of the design and Mellow_Labs made a lot of progress over the last nine months. Mellow_Labs isn’t the first to devise an automatic pill dispenser and there are many other styles out there, but this design’s operation is quite clever. It contains a stack of hoppers, each of which can accommodate several dozen pills. It’s setup so that a user can add however many hoppers they require, up to a maximum of four. It would be nice if it could handle a greater number of hoppers, but that caused issues with the feedback sensor.

Each hopper has a servo-actuated dispensing mechanism that rotates and pushes a single pill out of a chute. The pill then drops down into a collection bowl at the bottom. Because the dispensing mechanism isn’t always successful, Mellow_Labs put a vibration sensor on the collection bowl. If a pill lands in the bowl as expected, the sensor registers a small vibration and the next hopper will activate. If it doesn’t register any vibration, it knows the dispenser failed and it will try again to dispense a pill from that hopper.

Most of the revisions were the result of Mellow_Labs refining the mechanics and simplifying the electronic circuit. Earlier versions required two microcontroller development boards, which Mellow_Labs admits was a clumsy approach. The current (and hopefully final) version uses just a single Wemos D1 Mini development board. It receives dispensing commands from a Node Red server via Home Assistant and those commands adhere to a preset schedule. The advantage of this approach over a schedule hardcoded in firmware is that the user can easily adjust the schedule as their needs change.

The structure of the pill dispenser is 3D-printable and those models, along with all of the code and circuit diagrams, are available on Mellow_Labs’ GitHub page if you want to build your own automatic pill dispenser.