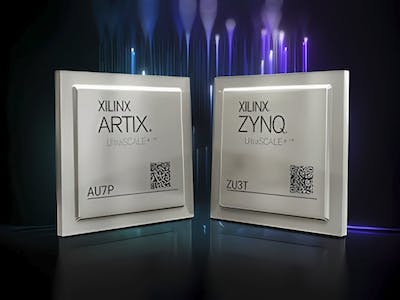 “Building on the success of the Zynq UltraScale+ MPSoCs and Artix UltraScale+ FPGAs, AMD is extending the UltraScale+ family with two new devices,” AMD’s Romisaa Samhoud explains in the company’s announcement, brought to our attention by CNX Software. “The new AU7P and ZU3T devices are based on the 16nm FinFET process for low power, high performance-per-watt, and small form factor applications. These small, low cost, and low power entry points to the programmable logic (PL) transceiver-based UltraScale+ family offer improved features such as high IO-to-logic density, UltraRAM, DSP, etc.”

AMD Xilinx has a pair of new UltraScale+ chips coming out, with boosted specs and improved power efficiency. (📷: AMD Xilinx)

The Artix UltraScale+ AU7P FPGA offers, the company explains, a claimed 50 per cent reduction in static power, 20 per cent boost to input/output (IO) to logic ratio, and twice as many 3.3V High-Density Inputs/Outputs (HDIOs) as its AU7P equivalent. The part, Samhoud says, is ideal for applications needing high compute density thanks to a packaged size of just 8.5×10.5mm (around 0.33×0.41″) — with medical imaging, computer vision, camera, and automotive sensor applications name-checked in the announcement.

The Zynq UltraScale+ ZU3T, meanwhile, enters the family as the smallest model to include 12.5Gbps GTH transceivers — but despite its compact dimensions offers five times the transceiver bandwidth of the older ZU3 at 124Gbps total, a higher slice count in its digital signal processor (DSP) at 576 slices, and two and a half times the UltraRAM at 17.1Mb including block RAM. As with other models in its range, it includes a dual- or quad-core Arm Cortex-A53 primary processor plus dual-core Cortex-R5F real-time processor.

While the specs have been finalized, AMD XIlinx won’t be releasing the parts until the second half of 2023. (📷: AMD Xilinx)

The new parts come a month after AMD Xilinx announced it was to extend the lifespan of its popular 28nm 7-series parts clear through to 2035, including its Spartan-7, Artix-7, Kintex-7, and Virtex-7 FPGAs as well as its Zynq-7000 system-on-chip (SoC) parts. “We take our commitment to supporting long product lifecycles very seriously,” the company claimed at the time. “With the supply chain challenges facing the industry in 2022 and beyond, decisions on what devices to design into projects are more critical than ever. It would be costly to design in a device, just to find out one year later that the device has been marked for end of life.”

Sadly, while AMD Xilinx is happy to announce the parts it’s not quite ready to release them to customers: the Artix UltraScale+ AU7P won’t begin shipping until the second half of 2023, the company has confirmed, along with production silicon for the ZU3T. At the time of writing, the company had yet to disclose pricing for either part.