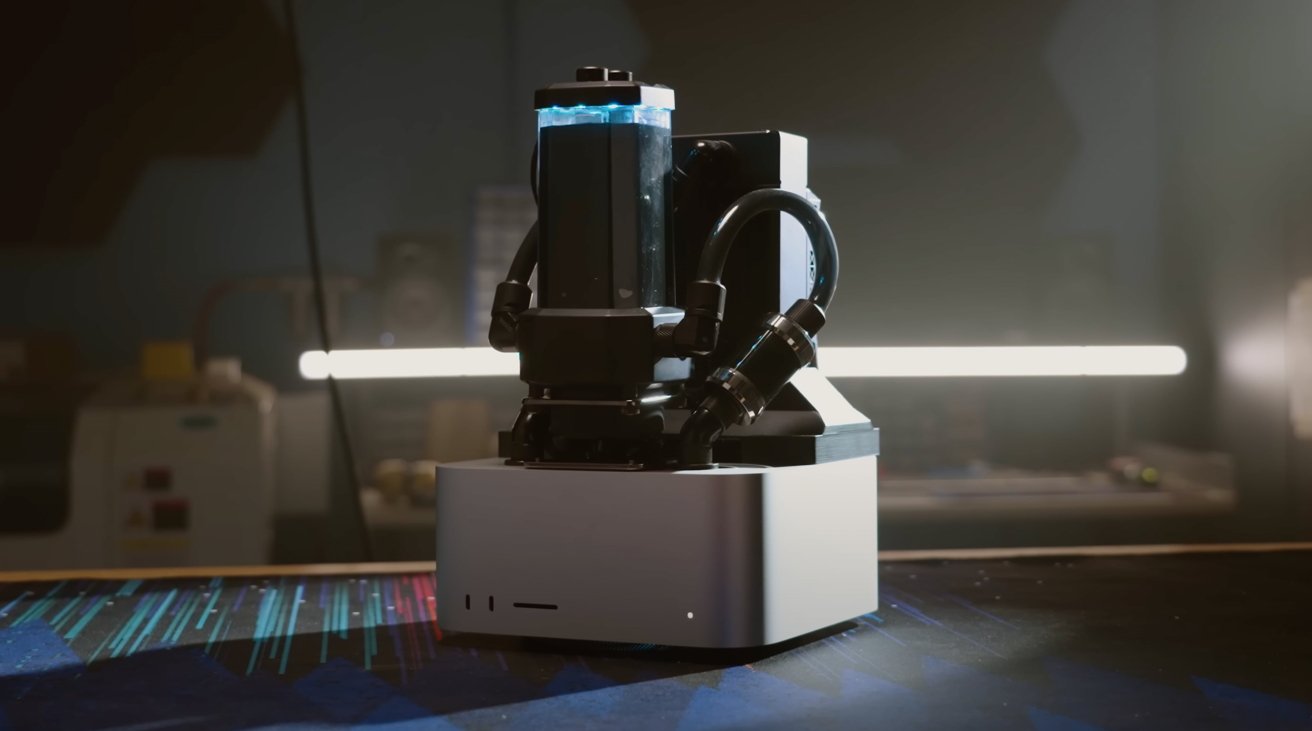 AppleInsider is supported by its audience and may earn commission as an Amazon Associate and affiliate partner on qualifying purchases. These affiliate partnerships do not influence our editorial content.

A YouTube video shows how a challenging attempt to add water-cooling to the Mac Studio ultimately doesn’t make much of an improvement to performance.

Experienced PC builders will be familiar with the benefits of water cooling, including the potential to offer better thermal conditions than air-based methods, the possibility of improved chip performance, and a reduction in noise. In a YouTube video posted on Monday, an attempt was made to install a water cooling system on Apple’s Mac Studio with a M1 Max processor.

The plan Linus Tech Tips had was to remove the existing cooling system from a Mac Studio, replace it with a water cooling-based version, and see how it performs. The channel had two identical Mac Studios on hand, allowing for a more direct comparison with like-for-like base units.

Replacing the cooling system in the Mac Studio seemed reasonably straightforward, as the existing system is a heatsink and a large blower section taking up half the internal volume of the enclosure. Removing the component wasn’t difficult, but did involve disconnecting a proprietary connection that supplied power.

After removing the heatsink and fans from a large section that comes into contact with the M1 chip using tools ranging from a heat gun to a milling machine, a water block was attached to the remaining plate.

To actually pump the water around the system, the plan involved milling numerous holes into the top of the Mac Studio’s aluminum enclosure, allowing cables and pipes to pass through. Due to the lack of space inside, the bulk of the water cooling loop had to be outside the Mac Studio itself.

Since the channel primarily deals with gaming-centric videos, RGB lighting was included in the water-cooling system. Corsair components were chosen for RGB elements, since it had a controller app that works in macOS.

After multiple days, including repeated disassembly and reassembly, the water-cooled Mac Studio did ultimately work. It also was able to run side-by-side with a stock Mac Studio of the same specification.

On the positive side, the Mac Studio was cooled down by 30 degrees versus stock. However, in Cinebench R23, the water-cooled Mac Studio scored 12,056 while the regular model managed 12,016. A second test resulted in a score of 12,104, representing a performance improvement of 0.7% — well within the margin of error of every benchmark.

The low performance change was cited as the M1’s “turbo boost” being “really terrible,” but that it ultimately doesn’t matter “because they sip power and are well cooled.”

Obviously, the process of adding water cooling is expensive, difficult, and problems generated by the process won’t be covered by either Apple’s warranty or under AppleCare. At the very least, questions would be raised by Apple support about the holes in the casing.

While we’re glad that the channel tried the mod, given the difficulty for the average user to acquire spare parts and to install them if they break, as well as the whole process and the minimal payoff, AppleInsider strongly advises against attempting what the video demonstrates.